Teamsters, union families and their supporters will hold a large (and we expect spirited) rally in Missouri's state capital tomorrow as Missouri lawmakers are expected to vote on a right-to-work-for-less bill.

Lawmakers are also expected to vote on paycheck deception. Corporate special interest groups are pushing for right-to-work-for-less and paycheck deception to restrict workers' rights and weaken their political power.

Both HB1617 (Paycheck Deception) and HB1770 (Right to Work) are listed on the House Calendar for this week. Both of them contain  language that would put either paycheck deception or right-to-work-for-less on the August 2014 ballot.

Although both are priorities of Republican leadership in the House, there’s bipartisan opposition to both bills. And as one Republican lawmaker said, 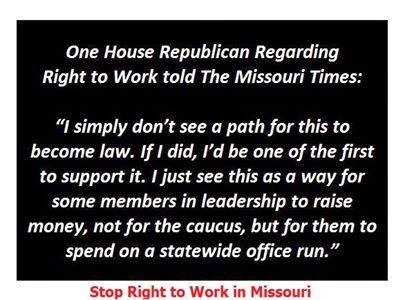 You can follow the debate tomorrow here: http://streaming.house.mo.gov/chamber/. People will be livetweeting using the #moleg hashtag as well as #paycheckdeception, #righttowork, and likely #HB1617 and #HB1770 as well.

We could win this one.