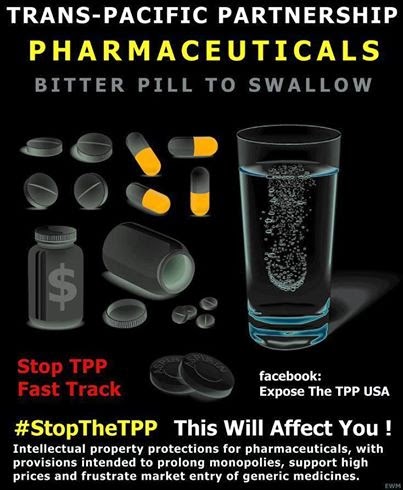 Here's yet another reason to oppose the corporate power grab masquerading as the TPP 'trade' deal:

It will make medicine more expensive.


...provisions advanced by the U.S. in negotiations over the Trans-Pacific Partnership (TPP) Agreement would undermine our ability to moderate prescription drug, biologic drug and medical device costs in public programs such as Medicare and Medicaid.

Corporate stooges Supporters of the TPP are gearing up to ram it through Congress without anyone getting time to look it over. It's called 'fast track,' though proponents try to call it something else. Fast track is the only way this horribly unpopular corporate power grab would make it on to President Obama's desk. So now is a good time to educate yourself about the TPP and to be aware of efforts to stop it.

Here, for example, is how The TPP would raise health care costs, according to Expose the TPP:


The TPP would provide large pharmaceutical firms with new rights and powers to increase medicine prices and limit consumers' access to cheaper generic drugs. This would include extensions of monopoly drug patents that would allow drug companies to raise prices for more medicines and even allow monopoly rights over surgical procedures.

The TPP could eliminate:

Posted by Teamster Power at 3:32 PM