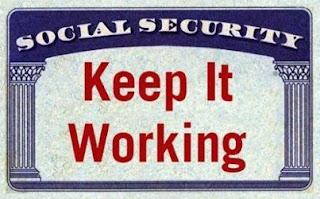 There are 199 people in America who will have paid their entire annual Social Security at the end of today. We know that because Teresa Ghilarducci, economics professor at The New School for Social Research, ran the numbers.


199 earn a wage or salary of over $50 million a year which turns out to be about $117,000 daily...after today those fellow country men and women stop paying Social Security taxes ... The Social Security earnings cap is $117,000 per year.

Medicare, on the other hand, has no cap. The lucky people who annually earn $50 million or more (like, um, McKesson's $51.7-million-a-year-man John Hammergren) will still pay Medicare taxes through the end of the year. (If you're looking for a list of those people, by the way, click here.)

Our friends at Strengthen Social Security remind us:


Social Security has a large and growing surplus. Social Security’s cumulative surplus is projected to be roughly $2.8 trillion in 2013, and will reach $2.9 trillion in 2020. Without any Congressional action to increase its revenue or cut its benefits, Social Security will continue to pay benefits to America’s eligible working families for around two decades.

Odious billionaires like Pete Peterson would prefer cutting the benefits that ordinary people earned to eliminating the cap.

We can't let that happen, can we?

Posted by Teamster Power at 2:47 PM