The middle class is just the working class with nicer stuff 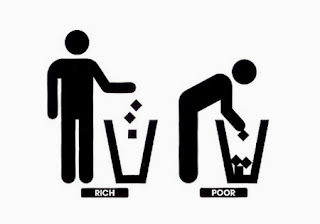 Middle-class 'professionals' don't always understand they're at the mercy of corporate greed just as blue-collar workers are. Somehow they think they deserve higher wages because they're better.

They are slow to grasp that doctors, lawyers and accountants, for example, keep their wages high by using their collective power to keep 'unqualified' people out of their professions.

Perhaps journalists are starting to understand that everyone who depends on a paycheck is working class, now that their jobs are being outsourced to India.

A writer at The Daily Mash, the UK's version of The Onion, poked fun at middle-class snobbery today:


MIDDLE class people share 100% of their genetic material with working class people, it has emerged.

Researchers at the Institute for Studies found that the differences between the two classes were entirely cultural.

Professor Henry Brubaker said: “Falling living standards among the middle class have prompted an identity crisis, with many professionals desperately hoping their DNA would continue to set them apart...there is no biological distinction between the two lower tiers of our society.

“You may think you’ve come a long way, but you’re probably just one brioche away from being a prole.”

And remember, many a truth is spoken in jest.