The rich are as selfish as you think they are 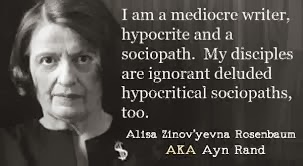 Rich people really are selfish and don't care about other people, according to political scientists who studied the One Percent. Their research answers the question of why our government isn't doing what we want it to do. (It's doing what sociopathic billionaires want it to do.)

The researchers assumed the wealthy have an outsize influence on politics (we know that already). Then they looked at their political preferences. What they found was disturbing.


... they are extremely active politically and ... they are much more conservative than the American public as a whole with respect to important policies concerning taxation, economic regulation, and especially social welfare programs. Variation within this wealthy group suggests that the top one-tenth of 1 percent of wealth-holders (people with $40 million or more in net worth) may tend to hold still more conservative views that are even more distinct from those of the general public. (Emphasis added.)

The researchers found, for example, that the top One Percent oppose anything that will help middle-class and working-class Americans.

Jamelle Bouie at the Daily Beast tells us most of the One Percent oppose a government jobs program, universal health insurance and expanded worker training program.


What the rich do support, however, are policies that would shift burdens to individuals, or introduce some nebulous “competition” into public goods. That includes charter schools (90 percent support), vouchers (55 percent), Social Security privatization (55 percent), and merit pay for teachers (93 percent).

If this agenda looks familiar, it’s because it’s basically identical to the one pushed by “centrist” deficit hawks in Washington, who have devoted themselves to the consensus positions of business and other economic elites.

In another study, they found:


They found that luxury car drivers were more likely to cut off other motorists instead of waiting for their turn at the intersection. This was true for both men and women upper-class drivers, regardless of the time of day or the amount of traffic at the intersection. In a different study they found that luxury car drivers were also more likely to speed past a pedestrian trying to use a crosswalk, even after making eye contact with the pedestrian.

Can't say we're surprised. The scientists are describing the entitled jerks -- the Kochs, the DeVoses, the Sheldon Adelsons -- buying off politicians to pass anti-worker laws in the states and cut Social Security, unemployment benefits and food stamps at the federal level.