Massive trade bill filed in Congress; you can help stop it 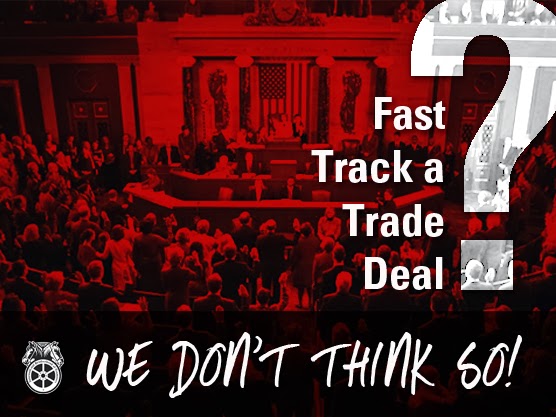 Legislation was filed today to make it easier to pass job-killing trade deals like NAFTA.

The legislation is known as 'fast track.' Sponsors know phony trade bills in the works  -- TPP and TAFTA -- won't pass if anyone looks at them too closely. People rightly suspect these deals will kill good American jobs, undermine democracy, raise the cost of health care and let tainted food from overseas into our grocery stores.

That's why the TPP has been negotiated in extreme secrecy, with only corporate lobbyists allowed into the negotiations. That's why you don't hear a whole lot about TPP from supporters -- they don't want you to know about it.


Three senior lawmakers on Thursday unveiled long-awaited legislation to help President Barack Obama strike major trade deals in Asia and Europe, setting the stage for a potential election-year battle between the president and many of his fellow Democrats in Congress...

The bill would allow Obama to submit trade deals to Congress for straight up-or-down votes without any amendments and lays out negotiating objectives for the agreements in such areas as currency, digital trade, state-owned enterprises, investment, labor, the environment, agriculture, services, intellectual property and trade remedies.

Here's what you can do: Click on this link and send an email to your representatives in Congress. Do it now. We cannot allow Congress to give a rubber stamp to the TPP and other bad trade deals by allowing Fast Track to pass.