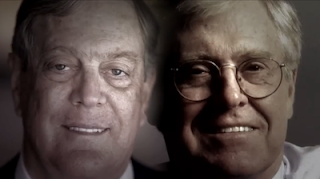 (UPDATE: Sorry folks, we were a little frazzled yesterday. We have heard rumors about RTW4Less in Pennsylvania, but this is a paycheck deception bill being discussed here.)

The Koch brothers now have their sights set on Pennsylvania, where they want to shove through a paycheck deception bill by spring, warns Stewart Acuff:


Word has just leaked out of the State Capitol in Harrisburg, Pa that the Koch Boys are talking to severely wounded Republican Governor Corbett to move legislation this winter and spring to outlaw union dues deduction for all state and local public employees.

It is the same kind of legislation Scott Walker passed in Wisconsin and Kasich tried to pass in Ohio.

If such legislation passed in Pennsylvania, it would effectively destroy public employee unionism in this state.

That would then open the door for an omnibus assault on all unions in this labor state...

Corbett is a very unpopular governor. People in Pennsylvania have had buyers’ remorse since he was sworn in. He is up for re-election in November. Some think this may in part be a desperate move to pump radical right-wing energy and money into his term and campaign.

Obviously, the wretched Koch boys are pushing because they want to create an American plutocracy that they control and make the 80 percent of us servants to their power and obscene wealth. Their recent history gives us ample proof of that.

This is a threat that should be taken seriously. Pennsylvania's right-wing propaganda network will be out doing the Kochs' bidding.

Here's how much the Kochs have given to Pennsylvania's stink tank, the Commonwealth Institute, to promote lies about right-to-work-for-less:
Pennsylvania also has its own homegrown sociopathic billionaire hell-bent on turning the commonwealth into a feudal serfdom: Richard Mellon Scaife. He funds the Allegheny Institute.

According to a report by Keystone Progress and the Center for Media and Democracy:

Brothers and sisters, it looks as if we have a fight on our hands!
Posted by Teamster Power at 5:14 PM