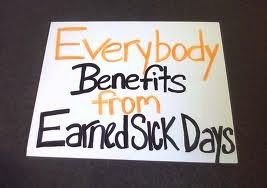 
A large majority of employers reported that the law did not affect business operations and that they had no or only small increases in costs. Businesses most frequently covered absent workers by assigning the work to other employees, a solution which has little effect on costs. Just 10 percent of employers reported that the law caused their costs to increase by 3 percent or more. Since the implementation of the paid sick days law, Connecticut employers saw decreases in the spread of illnesses and increases in morale...

Some other conclusions (thanks to Working America):
No one should be surprised. Paid sick leave has already worked in other parts of the country. ThinkProgress tells us:


An audit of Washington, D.C.’s policy, which was enacted in 2008, found that it didn’t encourage business owners to relocate or discourage new ones from opening up. Job and business growth have remained strong under Seattle’s law after a year, with the former actually stronger. Job growth was alsostronger under San Francisco’s law after it began in 2006 and very few businesses reported a negative impact, most saying it was either neutral or positive.

So next time some anti-worker jerk tries to tell you paid sick leave will harm business, tell him to stick all that in his pipe and smoke it.