Thousands of Teamsters are packing the Pennsylvania Capitol in Harrisburg today to oppose a paycheck deception bill that would put the state on a path to right-to-work-for-less. They are joined by steelworkers, firefighters, EMTs, police officers, electricians, lunch aides -- you name it.

The Teamsters' good friend Brett Banditelli is tweeting that the highly charged rally is by far the biggest event of 2014. People are stacked up outside, locked out in the cold, as the doors were locked.

"Why do billionaires always try to kill unions when its 0 degrees outside?," asks Brother Banditelli, and he has a point. It's the usual suspects -- sociopath billionaires like the Koch brothers -- who are throwing lots and lots of cash at this anti-worker legislation.


There is no doubt that the passage of HB 1507 dubbed the “Paycheck Protection Bill” would mean that Pennsylvania would move to become the next right-to-work state. The Teamsters can not be silent on this issue.  We firmly believe this bill will be moving very quickly, especially with the significant resources pouring into Pennsylvania from anti-union billionaire contributors that are backing this assault on labor. This bill is strictly designed to bust labor unions and it is being financed by billionaires so they can increase their pocketbooks off the sweat of the hardworking men in women of this great Commonwealth. 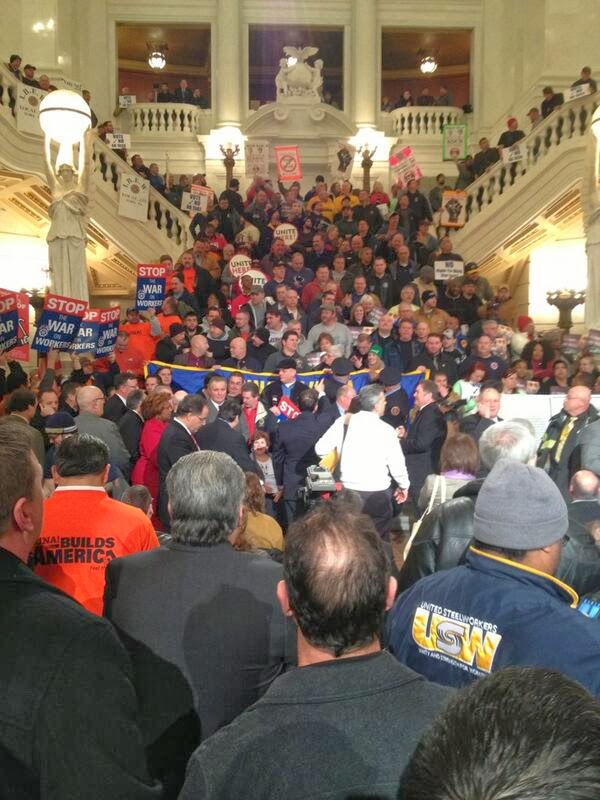 The bill would ban public employees from negotiating payroll deduction for union dues, fair share fees, and voluntary political contributions. It attacks school teachers, corrections officers and caregivers. Firefighters and police officers are exempted, but they know they'll be next if the bill passes.

A firefighter stood up before the crowd and said,


We are united to stop the the attacks on Pennsylvania unions.


I am proud to stand with the public sector and private sector who are united.

According to the AFL-CIO, the legislation silences union members' voices to advocate for jobs, improved educational opportunities, quality care for older citizens the sick and disabled and ensuring our communities are safe and protected.


The legislation threatens all workers’ ability to advocate for improved working conditions and safer jobs. Workers attending the press conference will be talking to their State Representatives and State Senators urging them to oppose this legislation and any proposals that silence or weaken the voices of working men and women.

See more photos at the Pennsylvania AFL-CIO's Facebook page here.
Posted by Teamster Power at 10:59 AM