TPP: A Trans-Pacific putsch, not a partnership 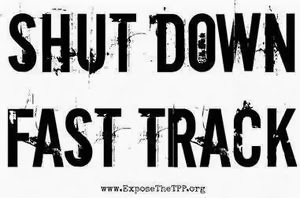 Barbara Weisel, a trade negotiator for the United States, actually told political scientist Gordon Lafer 'we have no position on democracy.'

Lafer asked her how could you have labor rights without democracy?

“Oh, you can have labor rights without democracy,” Weisel said, though she couldn't give a single example of a dictatorship where workers had rights.

Lafer was writing in Project Syndicate about a conversation held in 2010. Apparently it's just as true today.

U.S. trade negotiators have been in secret talks with countries like Vietnam to sign on to a giant corporate power grab known as the TPP. In Vietnam, 14-year-olds are forced to work 12-hour days. Workers have no right to free speech, to protest, to strike, or to freely associate.


...the one thing that non-democratic regimes can never tolerate is independent workers’ organizations. That is why trade unionists were the first through the gates of Dachau, and why Poland’s Solidarity movement posed an existential threat to Communist power throughout the former Soviet bloc.

Indeed, part of international investors’ attraction to countries like Vietnam and China is not simply that wages are low, but that the absence of democratic rights promises to lock in cheap labor for years to come. For example, when China revised its labor law in 2008, Apple, Hewlett-Packard, and other members of the US-China Business Council lobbied successfully to limit the expansion of Chinese workers’ rights.

American workers understand how they're being pitted against low-wage workers in developing countries. That's why the TPP has been negotiated in complete secrecy. U.S. Rep. Alan Grayson (D-Fla.) fought to see a copy of the negotiating texts, arguing he was entitled since he had to vote on it. This is his takeaway:


1)    There is no national security purpose in keeping this text secret.
2)    This agreement hands the sovereignty of our country over to corporate interests.
3)    What they can’t afford to tell the American public is that [the rest of this sentence is classified].

Now TPP supporters are pressuring members of Congress to pass fast-track authority, which would lock the United States into the TPP before they even vote on it.

We don't need politicians pulling fast ones on American workers with bills like 'Fast Track.'

You can help stop this thing. Start by signing this petititon: http://bit.ly/L0EN5C