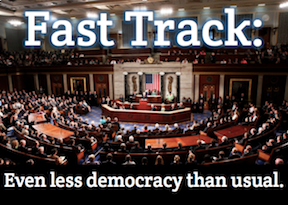 Voters by a 2-to-1 margin oppose Fast Track authority to pass trade deals, according to a new poll by Hart Research released today.

By a 62 percent to 28 percent, voters are against Fast Track, which would force Congress to make an up-or-down vote on trade deals, according to Guy Molyneux, a partner with Hart who presented the findings on a conference call with reporters. The poll results, said Molyneux,


...would set off alarm bells in any campaign in the country.

Republican voters are especially opposed to Fast Track, with 87 percent against it and only 8 percent in favor. That is significant since the bill is likely to move first in the House, which has a Republican majority.

Molyneux said the public is increasingly concerned about and opposed to trade deals. By a 2-to-1 ratio,  Democrats, Republicans and Independents all think trade deals hurt more than help the country. And voters' top priority is preventing U.S. jobs from going overseas.

Fast Track elicits intense opposition from 43 percent of voters, who say they are less likely to vote for a member of Congress who supports it. According to Hart,


Demographically, opposition is very broad, with no more than one-third of voters in any region of the country or in any age cohort favoring fast track.


“I’m against fast track,” Reid told reporters in Washington today. Asked whether he would block a floor vote on such a measure, he said, “We’ll see.” He said the Obama administration and top Senate Democrats are aware of his position.

“Everyone would be well-advised just to not push this right now,” said Reid, a Nevada Democrat.

Posted by Teamster Power at 3:18 PM