The billionaires are getting nervous 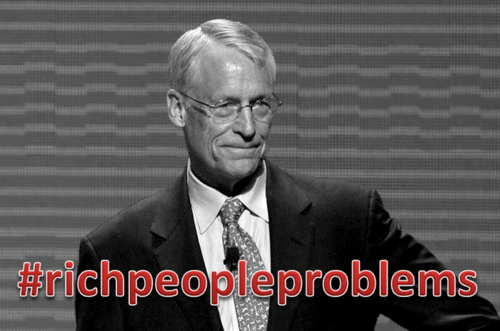 Nervous billionaire Tom Perkins compared American populists to Nazis and billionaires to their Jewish victims in a recent letter to The Wall Street Journal.

Here's what he wrote:


I would call attention to the parallels of fascist Nazi Germany to its war on its "one percent," namely its Jews, to the progressive war on the American one percent, namely the "rich."...This is a very dangerous drift in our American thinking. Kristallnacht was unthinkable in 1930; is its descendant "progressive" radicalism unthinkable now?

Perkins later apologized once he realized he'd gone too far. Even the pro-business Bloomberg News called his letter an 'unhinged Nazi rant.'

Another billionaire, Steve Schwarzman, compared a plan to deprive hedge fund managers of a tax loophole to Hitler invading Poland.

Columnist Paul Krugman detects something else behind the billionaires' insecurity: a sense that they really don't deserve all their wealth and privilege.


I also suspect that today's Masters of the Universe are insecure about the nature of their success. We're not talking captains of industry here, men who make stuff. We are, instead, talking about wheeler-dealers, men who push money around and get rich by skimming some off the top as it sloshes by. They may boast that they are job creators, the people who make the economy work, but are they really adding value? Many of us doubt it - and so, I suspect, do some of the wealthy themselves, a form of self-doubt that causes them to lash out even more furiously at their critics.

Perkins and Schwartzman aren't the only people to fear the billionaires' relentless drive to impoverish workers will result in a violent backlash. The development charity Oxfam recently reported that 85 rich people control more wealth than the poorest half of the world. Oxfam, reported The Guardian,


...fears this concentration of economic resources is threatening political stability and driving up social tensions.

New York Magazine writer Jessica Pressler in the summer of 2012 rode around the Sag Harbor estate of billionaire Jeff Greene in his dune buggy. He showed her his boats, his vast forest of scrubby pine and his private beach. At one point he throttled the engine and paused:


Greene gazes across the bay at the multi-million-dollar houses peeking from behind the trees. I assume he’s quietly contemplating acquiring even more of the shoreline, but then he says something surprising. “If somebody wanted to go after a rich person,” he observes, “they have got their pick of the litter out here.”

It’s strange to imagine someone like Greene, who counts Mike Tyson as a close friend, and who has a streak that caused the L.A. party girls to refer to him as “Mean Jeff Greene,” feeling vulnerable. It’s hard to think of any superrich person as vulnerable, just as it’s hard to think that a bear with outstretched claws and giant teeth is more afraid than you are. But over the past few months, it’s become clear that rich people are very, very afraid.

Greene believes America's huge class of impoverished people will rise up someday and take over the country. He thinks rich people have a vested interest in making sure that doesn't happen by paying a few more taxes to give poor kids education, health care and enough to eat.

He had a few words for the Koch brothers, as well:


“I see David Koch a lot of the time. His policies are ridiculous. I don’t think he’s ever been to one of these schools where they have a rolling cart, where one computer has to go to different classrooms, and it can make so much difference, a $700 computer! I don’t think these guys realize, this is what they’re cutting off? To say to those kids, ‘Too bad, every man for himself’?”

From the mouths of billionaires...