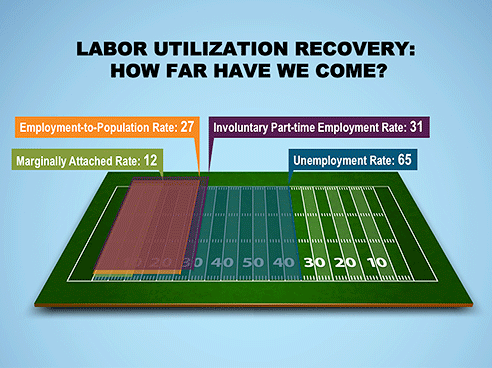 The war on workers has created a shadow labor force of people who want or need to work but can't find jobs.

That's according to Dennis Lockhart, of all people. He's the president of the Federal Reserve Bank of Atlanta, and he recently sounded a dire warning about the lack of good jobs.

Millions of Americans cannot find good jobs, Lockhart said in a speech the other day:

Lockhart dismissed the argument that it's because Baby Boomers are retiring. He looked at prime-age workers -- people aged 25-54 -- and found their participation rate is down significantly at 2.1 percent.


This suggests that other factors, such as low prospects of finding a job, are playing a role.

Underemployment is a problem, too, he said:


Many Americans are working fewer hours than they would prefer because their employers are offering them only part-time work. The share of workers who are involuntarily working part-time doubled during the recession and has moved only about 30 percent lower since the recovery began.

About 4 million more people are unemployed today than before the recession, he said.


It’s accurate to say the country has a large number of people in the so-called “shadow labor force.”

That shadow could destroy the economy.