Teamsters battling across the USA 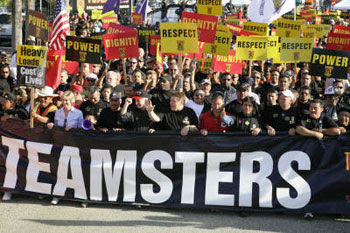 The war on workers isn't limited to state capitals. (But you knew that.) Teamsters are fighting back against employers who keep wanting more, more, more for themselves and less, less, less for their employees.

Here's a quick recap of some headline-grabbing Teamster actions:

Posted by Teamster Power at 8:05 AM