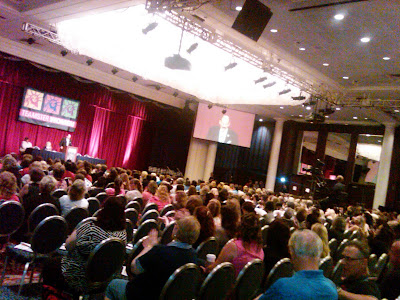 Teamster women are a special breed, and no hurricane was going to keep them away from the annual women's conference in New York City.

Our sister Melody Campbell from Local 377 in Youngstown, Ohio, captured the spirit of the event in a Teamster Women Facebook posting:


Look Out New York, Teamster Women are arriving and will sweep the city! Can not wait to get there and meet all of the On-Line Sisters!

Right now, Teamster women are joining New York Local 814 for a rally at Sotheby's, which locked out its employees during contract negotiations. Said Julian Tysch, a locked-out Sotheby's art handler:


We are responsible for shipping, receiving, unpacking, assembling, and installing exhibitions of artwork and antiques valued in the millions of dollars. With profits over $100 million in the last quarter alone, I don’t understand why Sotheby’s would make such a bad decision to outsource this sensitive work and kick us to the curb for no reason.

Earlier, Sue Mauren, secretary-treasurer of Local 320  in Minneapolis, spoke to the 800-plus Teamsters at the conference.


Winning the war on workers is about fighing back. We need to fight back by demanding a bailout for American workers, a real jobs program, pension protection and a moratorium on home foreclosures. Sisters and brothers, we need to work harder than ever before and we need solidarity more than ever before. We need to support our union more than ever before. Hundreds of thousands of people demonstrated in Wisconsin in what can only be called an uprising of workers. Teamster brothers and sisters coming together to unite and fight the war on workers -- this is what democracy looks like.

Posted by Teamster Power at 4:08 PM