All 4 Paul Ryan offices under occupation or protest...

Here's the latest on the protests at the offices of premium wine enthusiast Paul Ryan, thanks to Wisconsin Jobs Now:


After being kicked out yesterday, permanently, activists in Paul Ryan’s district decided to come together and have retaken the Kenosha office. They once again decided enough was enough – and, fed up with the runaround, they marched back in the office and demanded to know why he isn’t holding FREE and public town halls.


Day 6 of the “Where Is Paul Ryan” Protest continues. This is Janesville’s second day of hitting the streets, but they’re staying strong.

Here's a picture of the Janesville protesters: 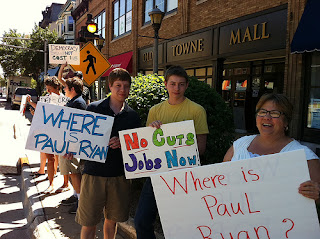