Welcome to Food Stamp Nation. Yup, it's us. 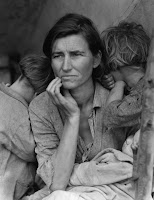 That's one out of every five Americans. It is a scandal and a tragedy. It is also a direct result of the corporate war on workers. Many Target and Walmart employees, for example, use food stamps.

Low pay forces a lot of people to accept government help. Forty percent of the people who use food stamps are in families where at least one person has a job. Reports Reuters,


In some parts of the country, shoppers using food stamps have almost become the norm. In May 2011, a third of all people in Alabama were on food stamps -- though part of that was because of emergency assistance after communities were destroyed by a series of destructive tornadoes. Washington D.C., Mississippi, New Mexico, Oregon and Tennessee all had about a fifth of their population on food stamps that month...

And that's only likely to get worse: So far in the recovery, jobs growth has been concentrated in lower-wage occupations, with minimal growth in middle-income wages as many higher-paid blue collar jobs have disappeared.

What's even more disgusting is that extremist politicians are now considering cutting the budget for food stamps even as they refuse to consider raising taxes on the wealthy. According to Reuters,


Republican leaders in the House of Representatives propose changing the program so that the funding is through a "block grant" to the states, rather than allowing it to grow automatically when needed due to an emergency, such as a natural disaster or economic crisis.

And Karl Rove, for example, just penned an op-ed in the Wall Street Journal saying,


...it is Mr. Boehner's challenge to make certain Congress doesn't substitute more spending on food stamps and unemployment benefits for measures that will actually spur job creation and economic growth...

Makes you want to hurl -- if you're lucky enough to have something in your stomach.
Posted by Teamster Power at 11:07 AM