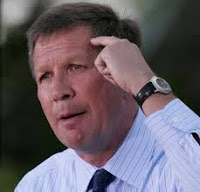 After all that, corporate stooge Ohio Gov. John Kasich is now offering a compromise over SB5.


Governor John Kasich, joined by House Speaker Bill Batchelder and Senate President Tom Niehaus, has invited union leaders and members of the campaign to repeal Senate Bill 5 to a meeting on Friday. The goal is to find a compromise that would avoid a costly and divisive campaign leading up to a November vote.

"I'm a believer in talking. Sometimes you can't reach an agreement, but you ought to talk," Kasich said. He confirmed reports of previous meetings between the two sides several weeks ago. Those talks broke down when Kasich says union leaders walked away from the table. He's hopeful this last effort won't end the same way.

"Let's sit down and see if we can reach some agreement that is in the best interest of our communities, our public employees, and the people that represent them in the private sector." Kasich added the invitation was not made because they feel they will lose in November. (Ed note: R-i-i-i-ght.)


Our members requested to meet with @JohnKasich many times before #SB5 was introduced. Including a cert ltr on 2/25. #letthepeopledecide

Here's what We Are Ohio had to say:

Well, no, actually they said the politicians who passed SB5 should repeal it themselves. Their press release said the following:


Today We Are Ohio once again stood firmly with the 1.3 million Ohioans who signed petitions to repeal SB 5 by telling the extreme politicians who passed it, to repeal it. Following a press conference held by Governor Kasich, Speaker Batchelder and Senate President Niehaus, We Are Ohio issued the following statement:

“We’re glad that Governor Kasich and the other politicians who passed SB 5 are finally admitting this is a flawed bill,” said Melissa Fazekas, spokeswoman for We Are Ohio. “Just like the bill was flawed this approach to a compromise is flawed as well. Our message is clear. These same politicians who passed this law could repeal it and not thwart the will of the people. They should either repeal the entire bill or support our efforts and encourage a no vote on Issue 2.”