Teamsters to bring ME labor mural copy to MD 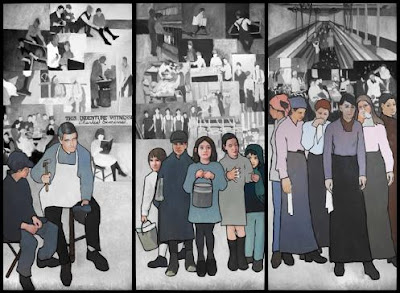 Remember when Maine's wingnut Gov. Paul LePage decided to remove a labor mural from the state Department of Labor because it "sent the wrong message?"

Working men and women all over the country viewed LePage's action as highly insulting. The Associated Press reported on the angry messages he got:


Gov. Paul LePage's decision to remove a mural depicting the history of the labor movement in Maine struck a raw nerve as critics lashed out in correspondence that poured in from all corners of the country, with several dozen writing letters vowing to cancel summer vacations.

The raw outpouring of emotion, with people opposing the governor's action by a margin of more than 9-to-1, flooded the governor's office with several thousand emails in less than a month.

"Your attacks on the working class of your state are just appalling to me and despite my love of the Maine coast, I will not set foot or spend one red cent there," wrote Audrey Fine Marsh of Media, Pa.

Well, now we learn Teamsters from Local 340 in So. Portland will haul a copy of the mural to a Maryland exhibition of labor murals, which will start on Aug. 30.


"It was a sad day when our governor, Paul LePage, removed these murals because they weren't syncing with his 'pro-business' vision," says Local 340 President Ken Eaton, in a statement. "When the opportunity arose for us to transport the murals to the art exhibition space in Maryland, we immediately signed on."

The $60,000 work, by artist Judy Taylor, was commissioned by the Department of Labor and hung in 2008. It is currently being stored in an undisclosed location.

Eaton says on Monday, the union will take the copy of the Maine mural to Maryland, where it will be shown in an exhibit featuring other works by Taylor.

We're doubting that the exhibit will include a portrait of LePage.
Posted by Teamster Power at 12:11 PM