What Do You Think About Trade? The WTO Wants to Hear from You 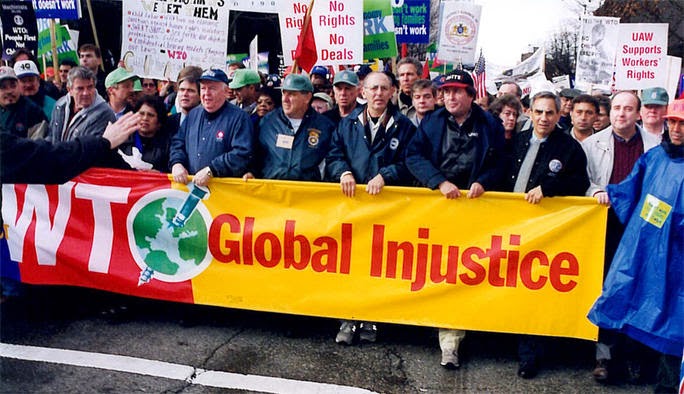 The World Trade Organization (WTO) is conducting a “public forum”—a short poll that asks questions designed to elicit positive responses about  trade and how it affects their lives.

Our brothers and sisters at the AFL-CIO are urging Teamsters and others to tell the powerful WTO what you think about trade. (Sad that this is what passes for public involvement in trade policy.)

Over the past 25 years, trade rules established through secret negotiations and designed mainly to benefit corporations have destroyed high-wage American jobs and sent them overseas.

Fill out the survey now and tell the WTO what you think about trade.

The Teamsters don't oppose trade, just unfair trade. The WTO promotes unfair trade that lets countries produce cheap exports by ignoring fundamental workers' rights and the needs of their own people. They allow corporations to exploit workers and destroy the environment.

WTO policies could restrict governments from reacting to financial crises. They could prevent governments from requiring contractors provide local, living-wage jobs. They protect patents to benefit pharmaceutical companies at the expense of sick people who can't afford life-saving medicines. Rules limiting “technical barriers to trade” have been used to eliminate such basic consumer protections as country of origin and dolphin-safe tuna labels.

WTO rules benefit global corporations at the expense of workers everywhere. They enable powerful economic interests to use the rules to their advantage to push wages down. They let corporations do as they please. In short, they put profits over people. We all pay the price in more dangerous workplaces, fewer social protections, dirtier air and water and governments that are less responsive to their citizens than they are to global capital.

Let the WTO know it’s time to end these harmful policies and develop trade rules that are designed to promote shared prosperity by increasing employment, raising social standards and protecting the environment.

Don't forget to fill out the WTO trade survey.

Posted by Teamster Power at 3:54 PM