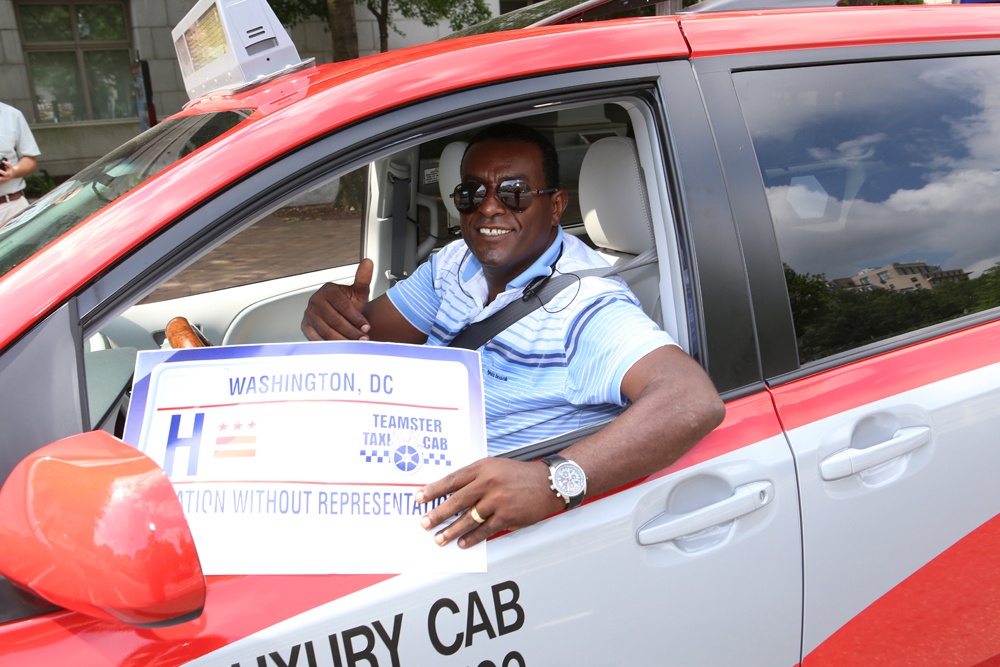 Hundreds of Teamster-represented taxi drivers caravaned through the streets of Washington, D.C., today to demand an end to illegal ride services.

According to Teamsters' news release,


The services, such as UberX and Lyft, are operating illegally in the city and are stealing work from D.C. taxi drivers. Last year, the city gave the services an extension to operate until regulations were in place.

“Virginia ordered a cease and desist order on these companies and the District of Columbia needs to do the same,” said Irfan Jamali, a D.C. taxi driver for the past 24 years. “We are tired of seeing our livelihoods harmed because of the city’s inaction. We demand fairness now!”

Taxi drivers have to pay 25 cents to the D.C. Taxi Commission for every ride, while Uber X and Lyft do  not. They have to pay $125 every year for a picture ID, they're required to be fingerprinted, they have to have FBI background checks and they have to have commercial license plates. The unregulated ride-sharing drivers don't have to do any of those things.

Taxi drivers around the world are protesting the unregulated ride services that are eating into their livelihoods. That doesn't mean they're against the drivers. Teamsters are trying to organize Uber and Lyft drivers in California and Seattle.

The Hill reported on today's protest:


The union’s protest involves a slow-moving taxi caravan that began Wednesday morning at Washington’s East Potomac Park. The drivers are planning to proceed to the U.S. Capitol and end at Freedom Plaza, which is located near the City Hall building in downtown Washington.

Union President Ferline Buie said her members are making the case that the rules governing online cab services were unfair to traditional drivers.

“The D.C. drivers have seen the protests across the United States and around the world, and today it is their turn to join the growing chorus calling for these services to follow the same rules and regulations that they must follow,” Buie said. “All they want is a level playing field.”

Posted by Teamster Power at 4:36 PM