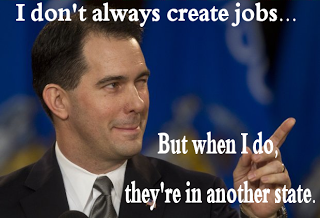 Prosecutors say Wisconsin job-killer Gov. Scott Walker was at the center of a criminal conspiracy to bypass state election laws, even as new jobs numbers released today show the state is 37th in job creation.


Prosecutors allege that Gov. Scott Walker was at the center of an effort to illegally coordinate fundraising ...  to help his campaign and those of Republican senators fend off recall elections during 2011 and '12, according to documents unsealed Thursday.

In the documents, prosecutors lay out what they call a "criminal scheme" to bypass state election laws by Walker, his campaign and two top deputies — R.J. Johnson and Deborah Jordahl...

The documents include an email in which Walker tells Karl Rove, former top adviser to President George W. Bush, that Johnson would lead the coordination campaign. Johnson is also chief adviser to Wisconsin Club for Growth.

The Club for Growth has deep ties to the Koch brothers. Club for Growth paid for radio ads supporting Walker's bill to strip collective bargaining rights from public service workers before lawmakers knew Walker was even filing the legislation.

Walker's scheme, allege prosecutors, "pervaded nearly every aspect of the campaign activities during the historic 2011 and 2012 Wisconsin Senate and Gubernatorial recall elections." Prosecutors said the Friends of Scott Walker committee and others "tacitly admitted to violating Wisconsin law."

Even the Koch-linked Club for Growth expressed concerns about the illegal campaign coordination. And Walker emailed Karl Rove bragging about it.

What's sad about all this is that Scott Walker has presided over one of the worst state economies in the country. Today, the Associated Press reported,


Wisconsin ranked 37th in private sector job creation last year, lagging behind the national average, based on the latest numbers released Thursday by the U.S. Bureau of Labor Statistics.

Gov. Scott Walker has said voters should rely on the numbers, gathered from a survey of nearly every Wisconsin business, to measure how well he is doing on his signature 2010 campaign promise to add 250,000 private sector jobs in the state by the end of this year.