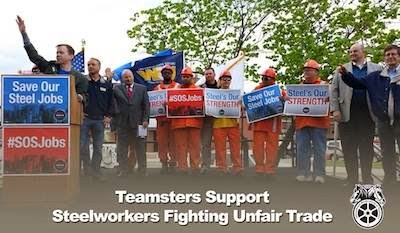 
After repeated warnings that thousands of domestic steel jobs could be at risk, the first local hit came Monday, as United States Steel Corp. announced it will idle its McKeesport Tubular operations.

It isn't just illegal dumping by Korea that's hurting American workers. The U.S.-South Korea trade deal that took effect two years ago in March has cost an estimated 46,000 U.S. jobs. On the two year anniversary of the trade deal, U.S. exports fell 11 percent and the U.S. trade deficit with that country ballooned 47 percent.


...the Commerce Department has failed miserably to impose duties on illegal dumping by South Korea, that if not corrected immediately will result in the loss of thousands of jobs in the steel industry.

...Conway pointed out that most of the steel pipe produced overseas is made specifically to undercut U.S. manufacturers. “South Korea is not using one inch of this product,” he said.

President Bloomingdale told the crowd the “entire labor movement is behind the steelworkers and all manufacturing workers in their fight to protect good jobs that build strong communities and grow our middle class.”


“American steel producers employ 8,000 workers across the country making OCTG and each of those jobs supports seven more in the supply chain,” Hoffa, Pierce and Simpson wrote. “The steel produced for the U.S. energy market accounts for ten percent of domestic production. It is imperative that American OCTG producers have a level playing field on which to compete.”

Noting that the agency is set to make a final ruling next month, the Teamsters urged Pritzker to devote “all available resources” to make sure the information sought from the countries being investigated is accurate. Hoffa, Pierce and Simpson also suggested that Commerce officials review and revise its preliminary decision so that it incorporates “the true costs of production and profit margins among the Korean producers of high-end OCTG pipes.”