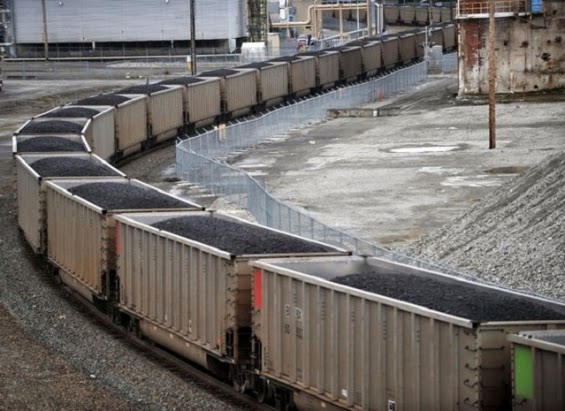 The EPA earlier this week proposed new regulations on electrical generation plants that could cost a staggering number of railroad jobs because it will reduce the use of coal.

That's according to the Teamsters Rail Conference, which represents more than 70,000 locomotive engineers and trainmen and maintenance of way employees. They're concerned that good, blue-collar jobs will be replaced with low-wage service jobs -- or few jobs at all.


On June 2, the Environmental Protection Agency proposed to regulate electrical generation plants to reduce greenhouse gases, issuing a rule that could cost a staggering number of good railroad industry jobs.

The rule, if it becomes final in its current form, would significantly reduce the amount of coal used to generate electricity.  Nearly one in five railroad jobs is directly linked to coal haulage.

If these jobs are lost, it is unlikely that new business generated on our nation’s railroads will ever make up for the loss of coal.  This rule has the potential to devastate communities reliant on the coal industry.  We have a responsibility to those individuals and families, and they cannot be treated merely as collateral damage in our country’s efforts to curb climate change.

The railroad jobs that could disappear under this regulation are among the most highly skilled blue-collar jobs in America.  We support efforts to invest in renewable energy and corresponding jobs in the so-called “green economy,” but the nation’s economy, as a whole, will suffer if those jobs are not as well-paying and secure, which is likely.

We understand that the United States must play a leadership role in reducing emissions globally, but other countries like China and India are in no position to switch from coal anytime soon.

Without a binding agreement on global greenhouse gas emissions, this proposal threatens to put U.S. manufacturing at a cost disadvantage and even more jobs will go overseas.  This is why deploying cost-effective carbon capture and sequestration technology is essential and should be a priority for this Administration and the Congress.

The Teamsters Rail Conference will continue to work for a balanced energy policy that stresses affordability and reliability — a policy that includes coal in an “all of the above” plan for America’s energy future.  There is a place for renewebles in this plan, but the rising cost of energy in Spain and other European countries should act as a cautionary tale against moving too quickly and aggressively, and failing to diversify our energy portfolio.

Recognizing that this is only the beginning of what will be a lengthy policy-making process, we will continue to work with the Administration and the broader labor community to ensure that any final rule prioritizes the economic health of working people as highly as it does the health of our planet.  There is a place where both priorities may coexist, but with this proposal we are most definitely not there yet.