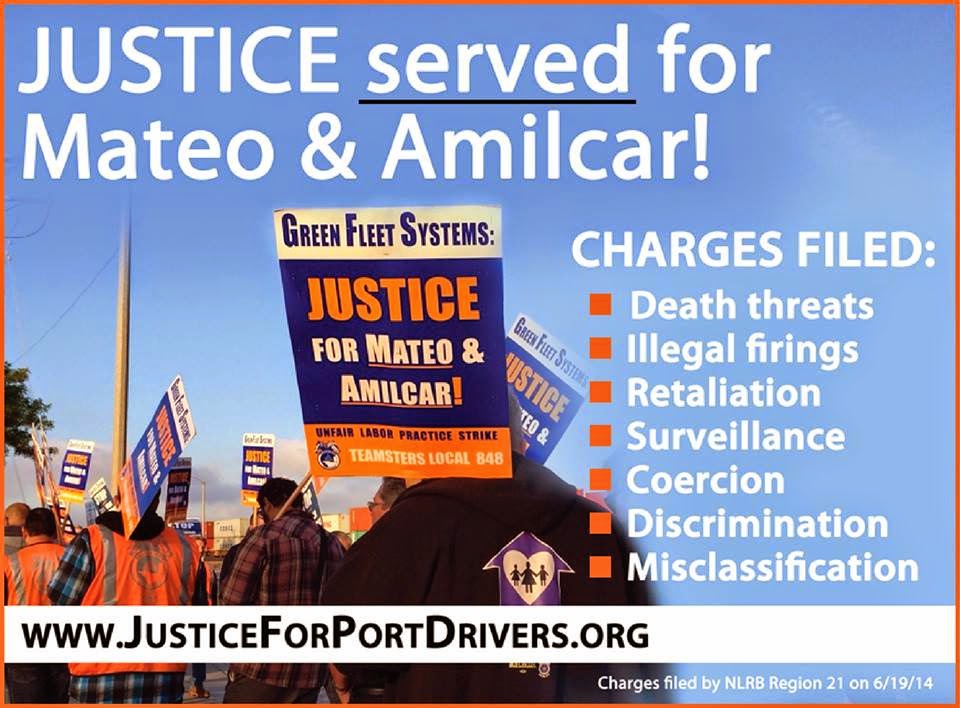 That spy made death threats against pro-union workers and suggested ways for management to harass them.

Mares and Cardona are among six Green Fleet Systems drivers who filed claims with the California Department of Labor Standards Enforcement for wage theft totaling about $943,000.
The Teamsters Union is strongly supporting the port truck drivers at Green Fleet Systems who are trying to lift themselves out of poverty by forming a union. Teamsters are also supporting port truck drivers all up and down the East and West coasts.

The Los Angeles Times reported on the NLRB's charges:


The National Labor Relations Board lodged the complaint Wednesday against Green Fleet Systems, a firm that employs about 150 truck drivers who haul cargo containers to and from the ports of Los Angeles and Long Beach.

"I feel good about the complaint," said Mateo Mares, one of the two drivers terminated at Green Fleet. "We've been standing up for our rights for so long. Finally we are getting justice."...

The NLRB's extensive allegations indicate that the company set out to destroy the lawful union organizing effort of its drivers.

Among other things, Green Fleet is accused of improperly putting workers' union activities under surveillance, coercing employees into signing anti-union petitions and trying to force drivers to withdraw wage claims filed with the state.


Green Fleet Systems has done everything they can to stop their drivers from having a voice on the job, but the drivers stayed strong knowing the law was on their side. This is a big moment for Green Fleet drivers who are a leading example to port truck drivers organizing across the country that when drivers stick together, they can defend their rights and win justice at the workplace.