The biggest creator of poverty jobs will surprise you 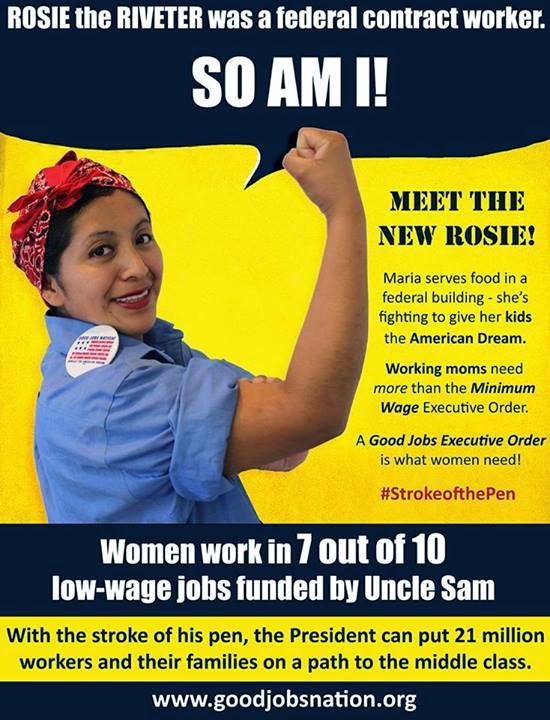 That's according to a new study by Demos, which concluded President Obama could put 21 million American workers and their families on a path to the middle class, if he issued an executive order that:

Our friends at Good Jobs Nation tell us working women who serve meals and clean inside federal buildings said the President’s executive order raising their pay to $10.10 isn’t enough.

They said they need a voice on the job so they don’t need to keep striking to be heard.


“We need a living wage and benefits,”says Yesenia Vega, a worker at a McDonald’s restaurant located at the Pentagon. She and other workers are also seeking decent health insurance, vacation benefits and paid sick days. “We need a union to get these things,” she says.

The women fighting for a Good Jobs Nation sent a letter to President Obama and Labor Secretary Tom Perez calling for collective bargaining rights – and in just a few days, over 30,000 Americans signed a petition calling on the Administration to act.


Nancy Duff Campbell, co-president of the National Women's Law Center, points out that women worked in factories and shipyards for defense contractors during World War II. They were abused and discriminated against, so they joined unions in record numbers and walked off the job:


Unions made a difference in the lives of women industrial workers back then, and they still matter for the women who dominate the low-wage service sector today, including low-wage federal contract workers.

Help empower the new Rosie the Riveter and sign the petition!
Posted by Teamster Power at 5:21 PM