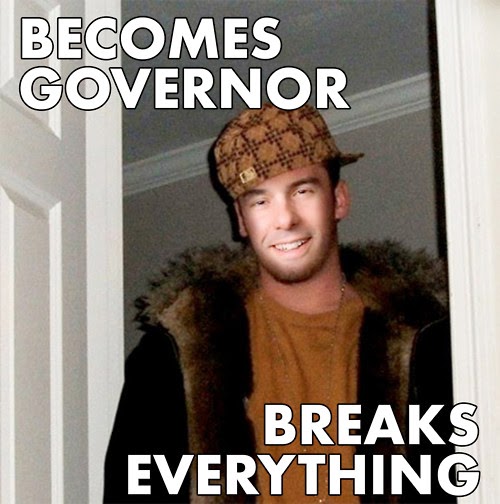 There's a teensy problem with Wisconsin job-killer
Gov. Scott Walker's claim that he isn't at the center of a criminal scheme because a federal judge said he isn't.

Problem is Judge Randa is a Koch hack. He took things of value from the Koch brothers. And he didn't manage to stop the Walker prosecution.

Randa attended a number of all-expenses-paid junkets funded by Koch brothers' groups who oppose campaign finance laws. The Koch brothers poured money into the same pro-Walker groups at the heart of the criminal investigation.

And Judge Randa didn't just try to halt the criminal investigation into Walker's campaign. He originally ordered prosecutors to destroy their evidence. But according to the Milwaukee Journal Sentinel, "the appeals court found he couldn't issue such an irreversible order in the early stages of the case."

Plus, Randa's assistant is married to a Walker campaign attorney.

Walker is currently campaigning for re-election against Mary Burke. If corruption charges against Walker don't sink him, his destruction of Wisconsin's economy should.

Yesterday, the Bureau of Labor Statistics reported Wisconsin's economy created jobs at half the national rate. Ever since Walker took office, the state has lagged the nation and the Midwest in commercial activity.

Like a baby with a hammer, Scott Walker pursued anti-worker, pro-Koch brother policies that are destroying Wisconsin's middle class.

Posted by Teamster Power at 2:05 PM