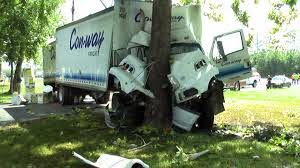 The Senate is considering whether to let overworked and fatigued truck drivers endanger the rest of us on the highways. Maine Sen. Susan Collins sneaked an amendment onto an appropriations bill that suspends for a year the 70-hour-per-week limit for truck drivers. If the amendment passes, truckers could work 82 hours a week.

Collins' timing was pretty bad. It was two days before a Walmart driver who hadn't slept in 24 hours slammed into a limousine, critically injuring comedian Tracy Morgan and killing his colleague James McNair.
It's not as if the number of large truck accidents are falling. They're on the rise. According to David Dayen at The New Republic,


...roadway accidents, which accounted for 15 percent of ... workplace deaths, have risen recently. In 2012, there were 333,000 large truck crashes, according to the National Transportation Safety Board, leading to nearly 4,000 fatalities and over 104,000 injuries. Three-quarters of the dead were occupants of vehicles other than the large truck, and so were not counted in the Occupational Safety and Health Administration’s official workplace fatality statistics. Overall, large truck accidents have risen steadily since 2009...

But the fact is it’s difficult for truck drivers to make a decent living by playing by the rules, and employers, including Walmart, effectively create a hazardous workplace by constraining pay to make cheating attractive, and ordering faster shipments with deadlines that can only be achieved through cutting corners.

The International Brotherhood of Teamsters sent an open letter to Congress saying any steps to “delay, revise or replace the current hours of service 34-hour restart provision” or allow increases in truck size and weight, “especially they size of double trailers from the current 28-ft. to 33-ft.” should be opposed. The Washington Post reported,


“Not all motor carries run their drivers to the limit of their hours-of-service, but it does happen,” Teamsters Union President James P. Hoffa wrote in a letter to the U.S. House of Representatives on Monday. “Drivers feel pressure from their employers to drive more than 60-70 hours a week with insufficient rest.” In the letter, Hoffa asked lawmakers to oppose efforts to rollback rest requirements for truckers.

The Teamsters Union is not interested in having our drivers and their families share the road with overworked and fatigued drivers. We're asking you to contact your Senators today and ask them to protect truck drivers and everyone who uses our nation’s highways.

Click here to contact your senator. Ask that they support an amendment to strike the hours of service suspension language from the bill.
Posted by Teamster Power at 3:45 PM