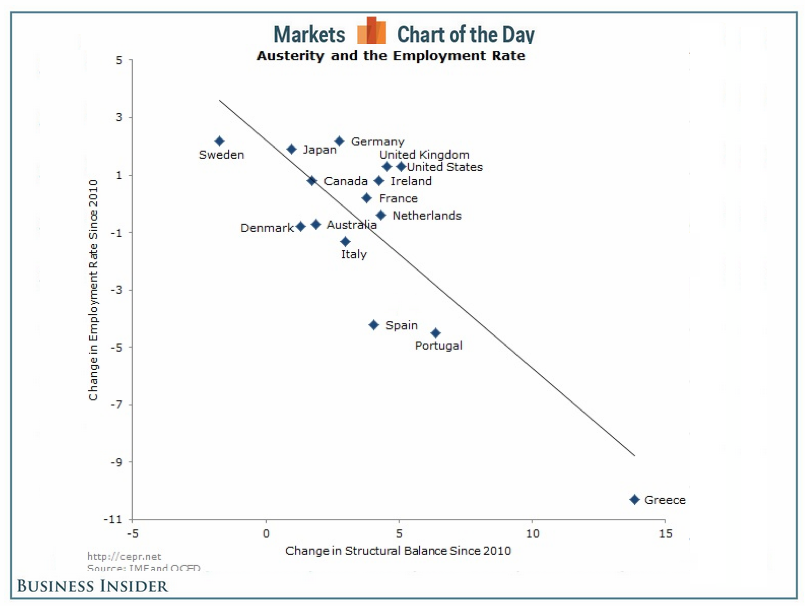 Cutting government spending has a negative impact on job creation, which is contrary to a common belief that 'government doesn't create jobs.'

The chart above shows how countries like Greece, Spain and Portugal cut spending drastically -- and experienced the steepest drop in the employment rate. Countries like the United States and Germany increased government spending to boost commercial activity -- and didn't fare nearly so badly as countries with governments that practiced budget austerity.

Ben Wolcott at the Center for Economic Policy Research created the chart. He explained:


In 2010, after an initial round of coordinated stimulus from both wealthy and developing countries, deficit hawks around the world regrouped. Pointing to growing deficits and debt, they demanded that countries reverse course and begin moving toward balanced budgets. The deficit hawks argued that deficit reduction could be accomplished without impairing growth because of the effect it would have in boosting confidence among businesses and consumers.

Many economists argued against this drive towards austerity at the time. They noted and rigorously explained the fallacious logic in the idea that deficit reduction could be expansionary. They also pointed out how fiscal policy had already saved the economy from a second depression and that more stimulus would likely be necessary. However, now we have more than three years of data, so we no longer have to speculate. A simple picture can be worth a thousand words (or in this case, billions).

You will not find this chart in any literature promoted by ALEC, the dating service for corporations and state lawmakers. ALEC every year sponsors a nutty 'report' that shows states with low government spending and weak unions are better for doing business. The report is written by a clown named Arthur Laffer who has been so discredited he has to peddle his ideas on FOX News.

Laffer gives high ratings for 'business-friendly environments' to two states that pursued ALEC's economic agenda: Kansas and Wisconsin. And yet here's how they've performed, according to Econbrowser:


...“pro-business” policies do not appear to be conducive to rapid employment growth.

Posted by Teamster Power at 1:30 PM