Uber X gets a free ride while taxi drivers pay 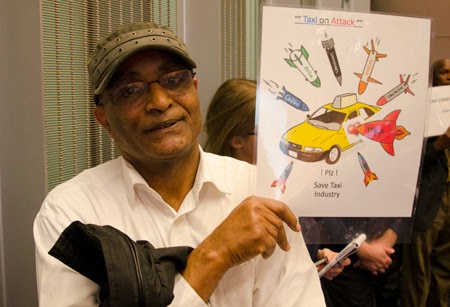 Teamster-represented taxi drivers in Washington, D.C., are bearing the brunt of regulation and taxation while competitors such as Uber X get a free ride.

They want the unfairness to end.

It did in Virginia. Recently, the Commonwealth of Virginia recently ordered a halt to ride-sharing services like Uber X and Lyft. According to WTOP,


The Virginia Department of Motor Vehicles says that ride services Lyft and Uber are violating state law and must stop operating immediately...

The letters state that the department has levied penalties against both companies for operating without proper authority. For several months, the state notified both companies that they were not complying with Virginia law.

Virginia's DMV also warned riders to ask about additional payments such as gratuities, fuel or mileage. So-called surge pricing can also run up the fare. A Los Angeles rider was charged a $357 fare late last year, and said the Better Business Bureau had fielded a number of similar issues.

Last year, D.C. gave the unregulated ride-sharing services an extension to operate until regulations were put in place. The District failed to enact regulations and the extension ended. That means Uber X, Lyft and Sidcar are operating illegally.

The Teamsters have nothing against the drivers. Teamsters are organizing Uber drivers in Seattle and in Los Angeles -- just as they're organizing temp workers at Taylor Farms in California.
Posted by Teamster Power at 2:48 PM