2014: The year the states began to de-privatize 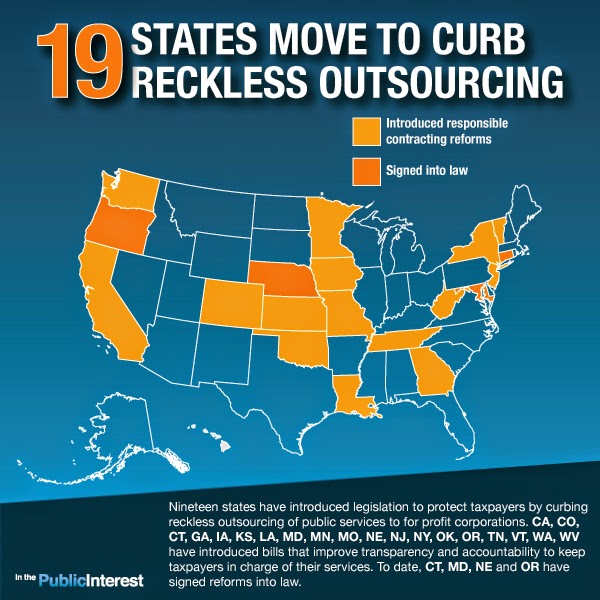 In 2014, taxpayers began to halt runaway privatization of government services. Maryland's Legislature passed a law banning private contractors from contracting with the state if they broke the law. In Oregon, Nebraska and Connecticut, legislatures passed laws requiring more supervision of private contracts.

Today, dozens of cities, counties and school districts are set to impose more control over private contractors, according to a new report by In The Public Interest.  And a total of 19 states had legislation introduced that would let taxpayers reclaim control of public services.

The rush to privatize government services began in the 1970s with claims the private sector could do it 'better, faster and cheaper,' than the government. But by now citizens are finding out 'privatization' often means private contractors looting the public treasury.

In, Chicago, residents rebelled against the privatization of the city's 36,000 parking meters. According to the Atlantic Monthly,


Parking-meter rates had suddenly gone up as much as fourfold. Some meters jammed and overflowed when they couldn't hold enough change for the new prices. In other areas, new electronic meters had been installed, but many of them didn't give receipts or failed to work entirely. And free parking on Sundays was a thing of the past.

The new meter regime sparked mass outrage. People held protests and threatened to boycott. But there was little recourse: The city had leased its 36,000 meters to a private Morgan Stanley-led consortium in exchange for $1.2 billion in up-front revenue. The length of the lease: 75 years.

It got worse: an inspector general's report found the city's taxpayers overpaid the Morgan Stanley consortium by $974 million.

Here's another example: 65 percent of state contracts with private prison company CCA guarantee 90 percent of the prison beds will be filled, or the state will pay CCA for the difference.

The In the Public Interest report describes some sensible proposals to let taxpayers take more control of government spending on private contracts: