The rich got a lot richer last year, with the amount of wealth in private hands increasing by 14 percent last year to $152 trillion, according to a new report.

Did you get any?

If you're not invested in the stock market, probably not. 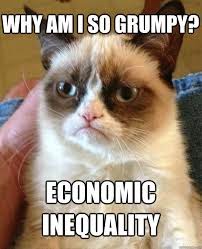 The Boston Consulting Group, in its BCG Growth Perspectives, notes "the growth of private wealth was driven primarily by returns on existing assets," which is code for "them that has, gets."

In one year in the United States there were 2.6 million more millionaire households for a new total of 16.3 million. That's right -- there are 16.3 million households that have more than $1 million in stocks, bonds and other financial assets. The number doesn't include real estate, luxury goods or businesses.

Guess who's doing really, really well? The ultra-wealthy, of course. Their wealth increased by 19.7 percent in 2013, according to Boston Consulting Group


Americans tend to think of their middle class as being the richest in the world, but it turns out, in terms ofwealth, they rank fairly low among major industrialized countries.

Another: The attacks on unions and trade deals that move jobs offshore.

A third: Exorbitant costs for health care and higher education.

Posted by Teamster Power at 2:00 PM