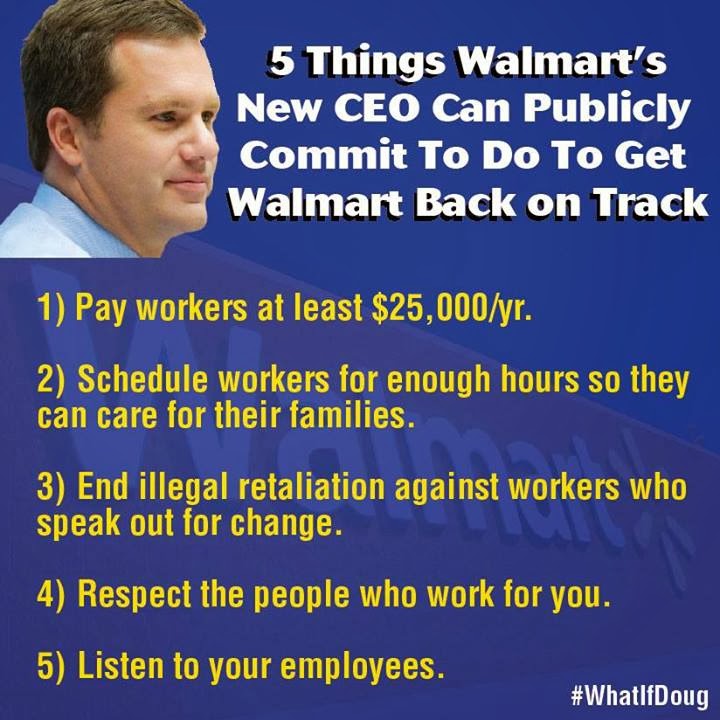 We kind of doubt it, but our friends at OUR Walmart are giving it a try. They are publicly asking Doug McMillon to pay Walmart workers $25,000 a year and treat them better.

OUR Walmart placed an ad in the Wall Street Journal on McMillion's first day on the job on Thursday, challenging him to do better. The Journal reported McMillon woke up...

...to find a personal message from worker advocates asking for better pay and treatment splashed across a full page ad in his hometown newspaper.

The ad comes a day after Wal-Mart disclosed a pay package under which Mr. McMillon could receive up to $30 million in compensation, stock, cash incentives and retention awards over the next three years.

He has a lot to make right. The peerless Hamilton Nolan at Gawker posted stories from abused Walmart workers today.

Nolan begins by reminding us the National Labor Relations Board charged Walmart with illegally retaliating against workers trying to organize.


The current NLRB case ... is somewhat of a test case (although union busting is nothing new to America's wealthiest family). Wal-Mart claims that it was within its right to discipline workers because, rather than engaging in a traditional union-organized strike, they were participating in "intermittent" actions like temporary walkouts and protests, which are "hard to distinguish from absenteeism."

Many Wal-Mart workers have willingly taken a very real risk of losing their jobs in order to participate in the recent protests and walkouts.

Four stories illustrate why: One woman injured herself on a job for which she had no training, tore her knee and was told by one manager to 'chill out' because she couldn't work. When the manager was confronted by two other managers for not putting her to work, the manager called her a liar and fired her.

Another employee was fired for failing to take lunch during a 6-1/2 hour shift as she was required -- working 4 pm to midnight on Thanksgiving!


I am one of the past Walmart employees .. I worked 30 to 40 hr weeks , payed only a part time wage. I was told many times that I would not be lifting anything over 20lbs because of back issues, but ended up lugging 100lb or more flats of water without the assistance of a machine on a regular flat roller. I was told to clock out at lunch so I didn't get paid and that if I did overtime it would be off the clock. I was flirted with by managers and the straw that broke the camels back was when I passed out, hit my head on the floor and was told that I had to be at work the next day. They let me off work, but offered no health care for me as I was "part time" and no one rendered medical aid when I passed out. I was told not to talk about what happened at work and that it was my fault.