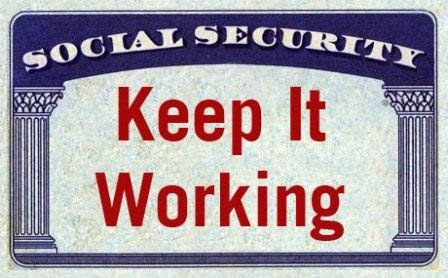 Loony billionaire Pete Peterson is probably furious that cuts to Social Security are becoming less of a possibility every day.  For years he's wanted to eliminate Social Security and Medicare and slash government spending. To that end, he created an astroturf group called Fix the Debt.

Fortunately, Peterson's  incompetent lieutenants made sure the Fix the Debt campaign backfired -- badly.

Real people fought back against the Fix the Debt billionaires, and they're winning: Congress raised the debt ceiling without a whimper recently. President Obama last week submitted a budget that keeps Social Security benefits at their current levels. A Gallup poll released a week ago shows American voters continue to view debt and the deficit as low priorities, despite the $40 million Fix the Debt spent to convince them otherwise.

Americans want jobs, and cutting government spending is exactly the wrong way to create them.

Bowles never understood that fixing the debt begins at home. He served as director of two corporations that required massive government bailouts --  Morgan Stanley and General Motors -- thus adding to U.S. government debt. Bowles was paid handsomely for looking the other way.He plundered corporations of $3.3 million for some very light duty, a few board meetings a year)

All you need to know about Alan Simpson is he actually compared Social Security to 'a milk cow with 310 million teats.'

Fix the Debt's comical attempts to persuade Americans they need to make do with less are recounted by the peerless Mary Bottari at the Center for Media and Democracy.

Bottari tells us Fix the Debt thought it would be a good idea to round up 100 CEOs to lecture Americans on how we need to expect less. Writes Bottari,


Grassroots groups were in no mood for advice from Fix the Debt CEOs, like Goldman Sach’s Lloyd Blankfein, who somberly explained to CBS News in November 2012 that Americans had to “lower their expectations.”

A worse spokesman could not have been found. Blankfein, after all, is CEO of the bailed-out investment bank also known as a 'great vampire squid wrapped around the face of humanity, relentlessly jamming its blood funnel into anything that smells like money.'

Sen. Bernie Sanders hit the roof and took to the floor of the Senate to denounce Blankfein's unbelievable arrogance.

Things got even tenser, as someone from the right-wing Heritage Foundation slugged a protester:


...protesters descended upon a Fix the Debt event for the first time, chanting loudly and rattling a senior presenter from the Heritage Foundation. Burke Stansbury from the Campaign for Community Change took a punch from the Heritage hysteric, and the throwdown was on.

Dozens of groups jumped into the fray, disclosing the conflicts of interest behind Fix the Debt's leadership council. State leaders, under pressure from community groups, were forced to resign. Bottari tells us they included  In Iowa, co-chair Dr. Andrea McGuire, former Congressman Dave Nagel, and State Rep. Bruce Hunter all resigned under pressure from the community group Iowa CCI. Michigan also lost its co-chair Jocelyn Benson. Virginia State Senator Ken Plum chose to pull his name, along with Juan Cotto of Washington State.

Moral of the story: When real people fight back, they win.
Posted by Teamster Power at 2:32 PM