The crapification of almost everything 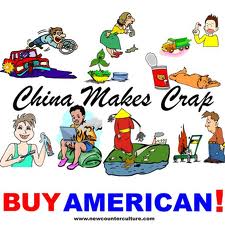 Remember when Levi's used to be good? The denim was so rugged you could practically stand them up when they were new, and they had real copper buttons. Now they're made overseas out of flimsy material and the buttons aren't even copper any more.

Levi's, like so many products, used to be made in America. Unfortunately, to many CEOs today, 'Made in America' means paying workers a living wage and decent benefits -- something they don't want to do. They'd rather outsource good American jobs and make cheap products overseas by workers who are little more than indentured servants.

The result is what the Naked Capitalist calls the 'crapification of almost everything.' Here's her rant about the cheap products we're forced to use today:


...Washing machines, dishwashers, and stoves all used to be good for forty years absent a leak-induced short or other unusual mishap. Now you are lucky to get ten...

Readers lament ... about how Sears Craftsman tools were terrific and the current tools under that name are poor imitations and it’s hard to find anything comparable to the old Craftsman line...

In my old days in investment banking, I dressed to look the part. By the mid 1990s, the deterioration in women’s clothing was evident. The tailoring and materials were markedly worse. ... everything got subtly shoddier ... In the winter, I live in cotton turtlenecks, black jeans, and pullover sweaters. Cotton turtlenecks have been systematically cheapened over the years. The length is shorter (and I prefer a hip-length shirt, both for warmth and to tuck more securely into pants). They are uniformly more fitted (which I don’t like), which uses less fabric. The turtlenecks themselves are shorter (I had a huge and unproductive argument with Land’s End when they shortened the necks by one inch and have never bought from them since). The cottons are thinner weave...

private equity ruined mattresses. Once the industry became a duopoly, the incumbents could foist crappy products on customers with impunity. Two sided mattresses (which last longer, not just because flipping them lets you wear both sides, but flipping is also better for the mattress for reasons not particularly worth explaining) were replaced with one-sided makes. Customers have been migrated away from spring mattresses to foam, which are cheaper to produce ... Yet the prices are higher in real terms despite the degradation.

The Naked Capitalist blames Wall Street, which forced businesses to focus on short-term financial results rather than producing good quality products at a fair price, improving manufacturing processes or developing new products and technologies. Instead they moved their factories overseas.

Just another reason to fight the TPP.