More signs the middle class is collapsing. Thanks, Walmart. 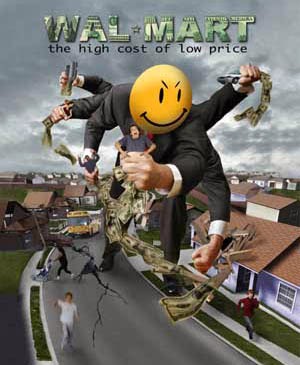 Wow. Working people are so broke these days that Walmart is losing out to Dollar General because it's merchandise is too expensive.

(Maybe Walmart should have thought of that when it started impoverishing entire communities by paying low wages and destroying locally owned businesses.)

Yahoo tell us Walmart is getting too expensive for the middle class. Sales are declining and its stock is slumping. And Congress is taking money away from working people:


At the start of 2013, Congress repealed a payroll tax cut that had been in effect for two years, effectively taking about $80 per month from the typical household budget. In November the government cut back on food-stamp benefits, which had also been beefed up during the recession. And effective January 1 of this year, Congress zeroed out enhanced jobless benefits that had been in effect since 2008, leaving less money for 1.3 million unemployed people already struggling to get by.

(Maybe the Waltons should have thought of that before financing stink tanks that promote subsidies for the rich but none for the poor under the guise of the 'free market.')

But guess what kinds of retailers are doing well? You guessed it:


Mostly high-end merchants such as Nordstrom (JWN) and Michael Kors (KORS), luxury automakers such as BMW and Mercedes, upscale appliance manufacturers including General Electric (GE) and even yacht manufacturers. As the New York Times noted in a recent article, demand is much stronger for GE’s top-of-the-line dishwashers and refrigerators than for cheaper, mass-market models.

It's a tiny comfort to know Walmart is getting hoisted by its own petard.