Exorbitant CEO pay is fraud born out of cronyism 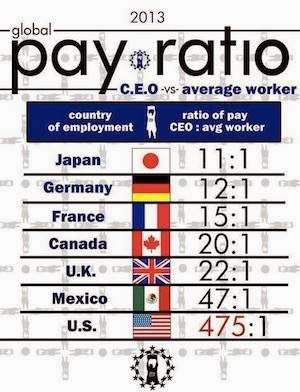 Inequality results from very rich people hoarding most of the wealth produced by public and private enterprise, the Huffington Post reminds us in a recent story. Writers Ryan Grim and Mark Gongloff expose the cronyism among corporate boards of directors and CEOs:


The press and popular culture treat this phenomenon almost as if natural forces were guiding it -- an invisible hand dealing out different shares to different people.

But the hands doing the dealing are in fact quite visible. They belong to the directors of the boards of the major companies in the U.S. and around the globe. One key source of wealth at the very top is the pay of the executives of our largest companies. That pay is approved by corporate directors, who are themselves paid for their service. Many of those directors are also executives at other companies, meaning they sit on both sides of the arrangement.

A couple of examples: Erskine Bowles, a director at Facebook, Norfolk Southern Corp. and Belk:


While he has toured the country over the past several years warning of reckless government spending, he has made millions sitting on the boards of companies that are dramatically underperforming against the market, yet lavishing generous payouts on their respective CEOs -- all with the approval of the board of directors.

Or one of the Teamsters favorites, McKesson CEO John Hammergren. His company paid nearly $2 billion in legal settlements for ripping off customers. Grim and Gongloff tell us:


...the board of San Francisco drug distributor McKesson doled out extra stock to CEO (and Chairman of the Board, naturally) John Hammergren, arguably leaving him better compensated than he should have been. At nearly $52 million, his pay last year was among the highest in corporate America -- and it was only a third of the $145.2 million he took home in 2011.

In such cases, shareholders have little recourse. Organizing shareholders into a voting bloc is nearly prohibitively difficult. Even when it does happen, it often still doesn't work. Activist McKesson investors and independent advisers last year launched a campaign to toss out three directors and reject Hammergren's compensation plan. Shareholders voted overwhelmingly to censure Hammergren's pay. But the vote was non-binding.

Check out your favorite CEO's pay here.
Posted by Teamster Power at 5:03 PM