How JPMorgan gets away with endangering the financial system again 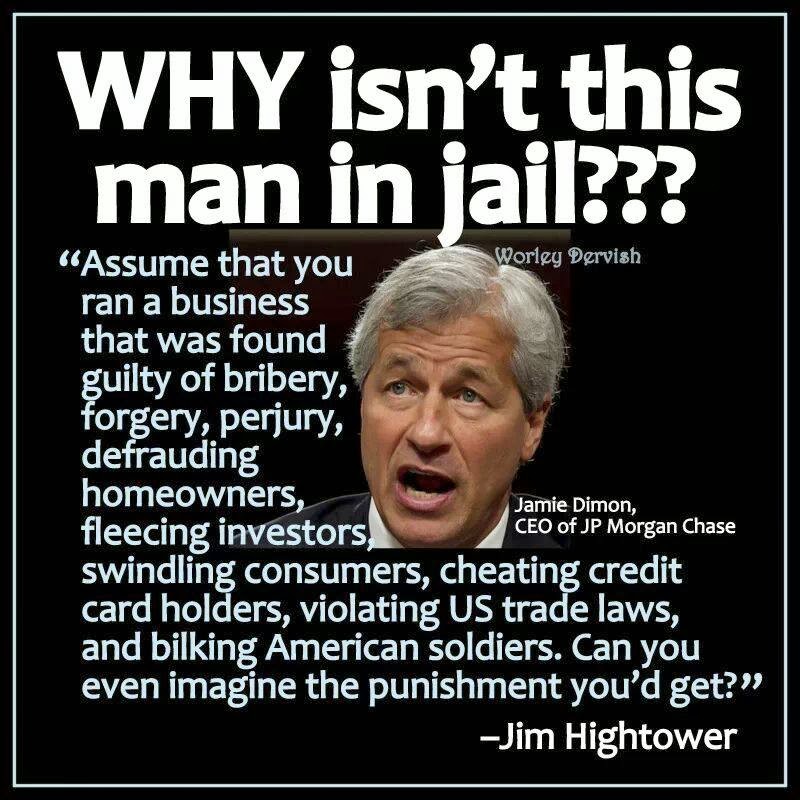 This is why Jamie Dimon gets to keep $20 million for recklessly running a bank that endangered the financial system with risky trades that blew up and caused at least $6.2 billion in losses: Because members of Congress who've been paid off by Wall Street are either too stupid or too corrupt to care.

Take U.S. Rep. Bill Huizenga, a gravel magnate from Michigan. Huizenga recently railed against bank regulation the other day. He alluded to the London Whale -- the nickname for the JPMorgan trade that went south. Huizenga actually said:

We don't know which is worse: He's either staggeringly stupid or lying. JPMorgan is, after all, a U.S. bank. A U.S. bank that has already paid $20 billion to settle legal claims.
The Wall Street on Parade blog summarizes what JPMorgan did wrong:

JPMorgan has owned up to losing $6.2 billion on these failed trades. We don’t know the full extent of the losses because it simply stopped reporting them to the public.

Bloomberg offers this primer on the London Whale, the result of wild speculation by Bruno Iksil, a trader in London:


...what Iksil and his colleagues did was the same old story — doubling down after a loss with bigger and bigger bets. But plenty more was wrong. They worked in a part of the bank, the Chief Investment Office, whose job was to hold down the bank’s risk level. Instead, the CIO used the $350 billion it had to invest (much of it from federally insured deposits) to become a moneymaker, with its London office focused on complex derivative trades that had less and less to do with hedging. In 2011, for example, one trade by Iskil brought in $400 million. The trouble came in early 2012, when the bank decided to reduce the risk in the London swaps portfolio by making more offsetting bets. As the strategy unraveled, Iksil’s positions grew so big that they disrupted the thinly traded markets he worked in — earning him nicknames of Whale and Voldemort, and making his group’s hard-to-unwind trades a target for hedge funds. After the trades collapsed, regulators found that Iksil’s colleagues had been keeping two sets of books to minimize the projected size of the losses — a discovery that triggered investigations in the U.S. and U.K.

Perhaps the most reprehensible thing JPMorgan did after coughing up $20 billion in fines was to lay off 7,500 people. Here's Rolling Stone's Matt Taibbi:


Their first move was to make sure people outside the penthouse boardroom took on all the pain, laying off 7,500 employees and freezing salaries for the non-CEO class of line employees.

Next, Chase's board members sat down, put their misshapen heads together, considered the impact of this disastrous year of settlements, and decided to respond by more than doubling the take-home pay of the executive in charge, giving Dimon about $20 million in salary and equity.

In the end, the fines left the decision-making class of the company not just uninjured but triumphant. Dimon's raise was symbolic of a company-wide boost in compensation following the mass layoffs, as average per-employee expenses rose four percent overall, to $122,653, despite the $20 billion burden imposed upon the firm by the state.


...they thought he bought the bank’s way out of trouble on the cheap, disproving the wailing in the financial firm toadying media that the Morgan bank had been ill-treated by the Administration.

Amazingly, the London Whale fiasco only accounts for a small part of the fines JPMorgan paid. Reuters reported last fall that the bank:


...agreed to pay $100 million and admit its traders acted recklessly, the CFTC said on Wednesday. The bank was instructed to send the funds to accounts receivable at the CFTC's division of enforcement.

The settlement follows one month after it paid $920 million to four other U.S. and British regulators to resolve probes of the bank's $6.2 billion in derivative losses involving its chief investment office.