Study: Ed Schultz is the ONLY newsperson talking about Fast Track and the TPP 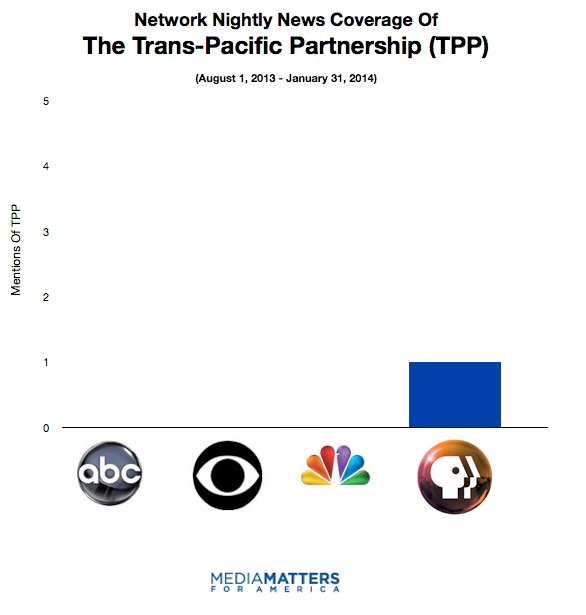 How about a shoutout to Ed Schultz, the only nightly newsperson talking about the TPP?

Over the past six months, nightly newscasters mentioned the TPP only 34 times. Only two of those mentions were not by Ed Schultz.

That's according to a study by Media Matters, which found network nightly newscasts are completely ignoring the corporate power grab called the Trans-Pacific Partnership, or TPP.

Today it matters especially because Congress is considering a Fast Track bill that would grease the skids for the TPP.

Check out the study done by Media Matters:


A Media Matters transcript search of CBS Evening News with Scott Pelly, ABC's World News with Diane Sawyer, and NBC Nightly News with Brian Williams from August 1, 2013 through January 31, 2014 found no mention of the Trans-Pacific Partnership.

There was one -- just one -- tiny mention of the TPP on PBS Newshour. Unsurprisingly, it supported the TPP...


Doug Paal of the Carnegie Endowment for International Peace argued that approving the TPP would improve relations with Asian nations.

Cable networks were just as bad -- except for Ed.  During the same six-month period, the three largest cable networks -- CNN, MSNBC, Fox News -- covered the ongoing negotiations 33 times during their evening programming.


The overwhelming majority of these mentions (32) originated on MSNBC and aired during The Ed Show.

Ya gotta love Ed. As for the rest of them...
Posted by Teamster Power at 2:41 PM