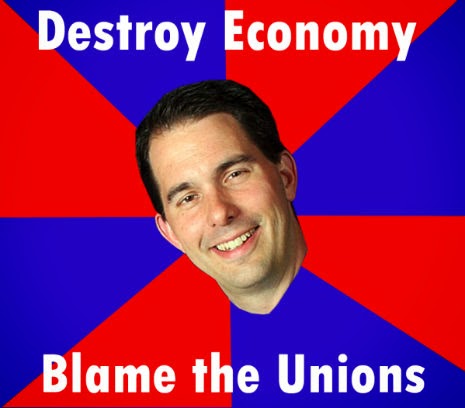 Emails released today in Wisconsin show job-killer Scott Walker was aware of a secret (and illegal) email network used by his staff to run his campaign for governor on the taxpayer dime.

The emails were those of Kelly Rindfleisch, Walker's former deputy chief of staff when he was Milwaukee county executive. Rindfleisch pleaded guilty to misconduct for fundraising and campaigning for Walker while working on taxpayer time. Her conviction (six months in prison) resulted from an investigation dubbed 'John Doe.' A second John Doe investigation is underway, believed to involve Walker's recall campaign. (Which, you will recall, resulted from his campaign to bust public service unions.)


Wisconsin Gov. Scott Walker, who has been eyeing a 2016 presidential run since his battles with labor unions made him a Republican star, is in the midst of dealing with the fallout of two criminal investigations at home that could complicate his move to the national stage.

One is ongoing, and while the other is now closed with no allegations of wrongdoing by Walker, it has the lingering potential to embarrass him.


The documents show how Walker, his county staff and his campaign aides were in frequent communication on policy and political matters, and tie Walker to the use of a secret email system set up in his county office.

In one email, Cindy Archer, a Walker aide, wrote to another aide, Kelly Rindfleisch: "Consider youself now in the "inner circle". :) I use this private account quite a bit to communicate with SKW and Nardelli. You should be sure you check it throughout the day."

In an interview with the Associated Press in November 2012, Walker said he built a firewall to ensure county workers were not ordered to do campaign work while on county time.

Draw your own conclusions. You can read all the emails here.