Another entitled billionaire runs his yap 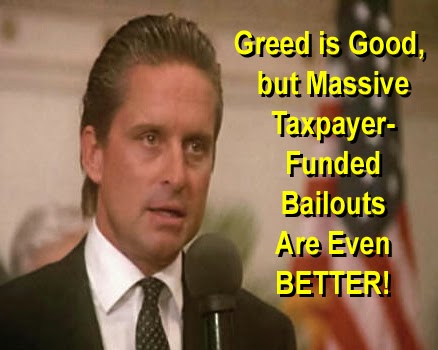 He told CNBC he wants people to “stop beating up on Lloyd and Jamie.” He added: “I think that would make a lot of sense, and I’m in favor of that.”

Who's John Mack, you ask? New York Magazine offers a pithy summary of his stewardship of Morgan Stanley, where he piled on so much debt the company borrowed $32 for every dollar it made:


In September 2008, the Federal Reserve accepted a last-minute bid from Morgan Stanley to become a bank holding company, which allowed them to borrow $107 billion. They later received $10 billion in TARP money. “John Mack saved Morgan Stanley to the extent that he got a giant government bailout,” says former TARP special inspector general Neil Barofsky. “Without that support, the company likely would have disappeared.” And, as others point out, had it not been for Mack, Morgan Stanley might not have needed saving in the first place. “He’s like the arsonist fireman,” a onetime colleague drily observes.

Here's why we won't stop beating up on Lloyd and Jamie (or Jack):

Posted by Teamster Power at 1:31 PM