Teamsters praise State of the Unions, a diagnosis and guide to labor’s recovery 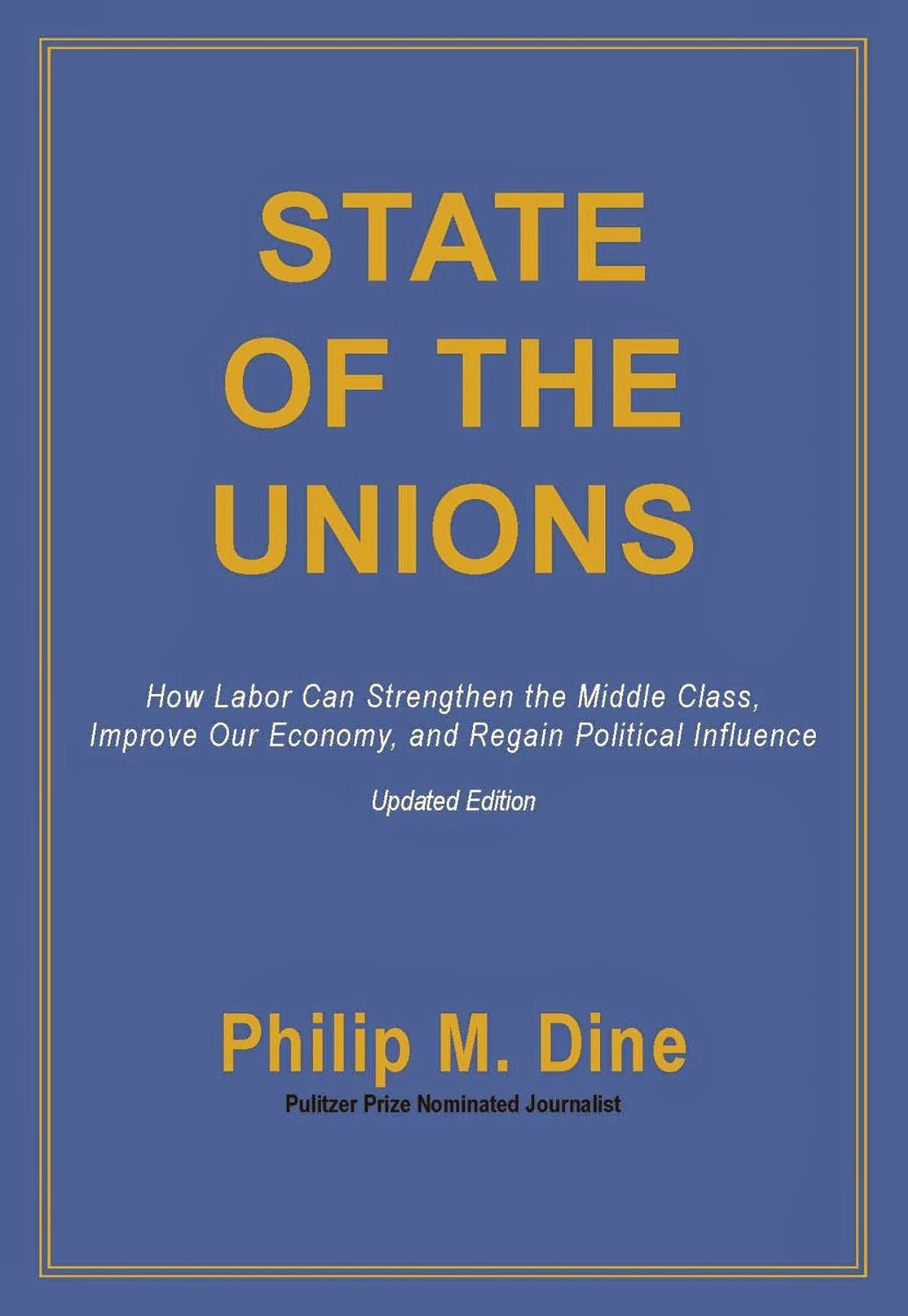 Why are America’s labor unions under such a relentless assault by enemies who not long ago told us unions were irrelevant? What are the stakes in labor’s recent and ongoing battles for survival – and is its survival even possible?

These and many other vital questions are confronted head on in Pulitzer Prize-nominated journalist Philip Dine’s State of the Unions: How Labor Can Strengthen the Middle Class, Improve Our Economy, and Regain Political Influence.

In his updated edition, Dine, a longtime labor journalist and son of a Teamster milk truck driver, brings to life the dire conditions facing today’s labor movement and examines the issues that have thrust unions back into mainstream discussion. While never hiding his solidarity with labor’s cause, Dine’s journalistic scrutiny spares neither side in the war over America’s union movement. He takes on the right-wing crusade against labor as well as labor’s own deficiencies.

State of the Unions shines a light on unions’ opponents – political, corporate and ideological – and captures the ingredients for today’s war on workers:


The fights that have gripped the public, affected our politics, and catapulted labor into the limelight result from a perfect storm – one that has joined motive with opportunity. Labor’s adversaries have long harbored a desire to destroy the union movement – but recent economic and political developments have provided the impetus for a full-scale effort to do just that.

Funny anecdotes are interwoven with Dine’s insights as a reporter embedded with labor. His latest edition reflects on the 2011 Wisconsin labor uprising which touched off an era of anti-union aggression and labor’s pushback.

Dine looks at other state-level assaults waged by business groups and right-wing lawmakers, too. Politicians like Wisconsin Gov. Scott Walker – underwritten by the Koch brothers and ALEC – are not motivated by a desire to extract concessions from unions or to simply slash budgets, he writes. Their aim is to destroy labor as a political and economic force altogether.

State of the Unions also takes a broad look at labor’s political strategies. Dine doesn’t shy away from critiquing labor’s often reflexive allegiance to the Democratic Party. He argues that labor would do well if it campaigned more around its own issues rather than politicians who often take unions for granted:


There is a strong push by many in labor to focus less on ringing doorbells or spending money to elect politicians and more on explaining their own issues and positions to the public in efforts that will outlast the campaign – something labor should have been doing all along.

But Dine’s book also shows the kind of political muscle that labor still has – and its ability to exert influence on its own terms.

Messaging is key to Dine’s assessment of labor. He devotes an entire chapter to the 1990 strike at Delta Pride, a catfish facility in Mississippi employing some 900 poor black women. The struggle brought labor and civil rights together in one of the biggest labor victories in the South. It galvanized community support with a boycott hitting key markets of the company. Media coverage in one remote labor-friendly city with Mississippi roots spurred favorable local coverage in a town where Delta Pride had powerful allies. The union, UFCW, targeted local press while the moral authority of the strikers as “cotton pickers-turned-catfish processors” won public sympathy. Dine concludes:


The catfish workers’ campaign shows that labor can not only win in the most difficult workplace situations but also that its actions can have profound and lasting impact. It also suggests that the chances of success can be increased when labor develops an innovative strategy…instead of going through the motions and relying on time-worn approaches.

Labor’s role in other events are examined in State of the Unions, including the prevailing wage fight in the wake of Hurricane Katrina and the 2006 Sago mine disaster in West Virginia. But the importance of labor’s ability to tell its story is central to all of these, according to Dine:


Labor’s failure to deliver its message means that its enemies get to define what unions are. Trade unionists should help reporters comprehend the links between the growing gap separating rich and poor and the assault on the right to organize…This involves labor doing several things it doesn’t sufficiently do now...

Labor’s corporate enemies often make themselves far more accessible to the press, giving them the edge in shaping public opinion.

Many more pages are devoted to the dramatic transformation and democratization of certain unions, especially the Teamsters. Because unions struggle to effectively tell these stories, stigmas from bygone eras still color public perceptions – and they are readily exploited by labor’s foes.

State of the Unions is filled with insights on labor’s ongoing dilemmas, from its internal divisions about how to move forward to its diminished influence on policies that affect its ability to recruit members (and vice versa!). These are not academic questions. They are urgent matters with real-life consequences for America’s middle class.


As a society, the challenges we now face, ranging from economic inequality to the future of public services, will be directly affected by what happens to labor. For it remains the only mass force capable of countering the rise of corporate dominance and the transfer of wealth from ordinary Americans to the affluent…Labor’s struggles will have much to say about what type of society we evolve into.

State of the Unions is essential reading for anyone who cares about the labor movement, working families and the American economy as a whole.
Posted by Teamster Power at 2:43 PM