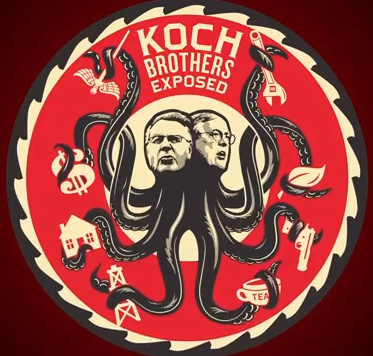 The Benedict Arnold Koch brothers get government handouts from the Farm Bill, which cuts $8 billion in food stamps.

And a secret document exposes the Koch brothers' plans to plunder the taxpayer even more.

The Farm bill made its way through Congress and is expected to reach President Obama's desk soon.  Lee Fang at The Nation reports the $8 billion cuts to food stamps are,

Hypocrisy, thy name is Koch. They actually accuse hungry American families of being a 'special interest.' Meanwhile, the Kochs successfully lobbied for continued spending --- $881 million -- on biomass energy, a program that pays the Kochs' Georgia-Pacific facilities in Alabama, Mississippi, Louisiana, Georgia, Oregon and Florida.

That sounds like a special interest to us. (And no, it doesn't sound like a 'conservative' or 'libertarian' group that's trying to shrink government. It sounds like corporate predation on the middle class. But we digress.)

The Kochs' got another big slice of corporate largesse from the Farm Bill: An exemption for Georgia-Pacific and other timber companies from the Clean Water Act. That exemption allows the Kochs' timber operations to let pesticides and chemicals run off into rivers and streams.

Hungry families don't have the money to purchase lobby members of Congress the way the Kochs do. The Kochs want to keep it that way. But Mother Jones obtained a secret document from a Koch meeting with donors at a posh resort last week . It lists the names of the sociopathic billionaires hedge fund billionaires, top corporate executives and real estate moguls wooed by the Kochs to help win elections in November.

The Koch donor network is a force to be feared. Mother Jones reports it raised more than the entire Republican National Committee. Its subsidiary, Americans for Prosperity, has spent more than $20 million beating up on congressional Democrats. Reports Mother Jones:

At least half of the one-on-one sessions involved representatives of Americans for Prosperity, the political advocacy group founded by the Koch brothers and their top political adviser and strategist, Richard Fink, a Koch Industries executive vice president and board member. ...

In the past, Koch Industries has distanced itself from AFP and its political activities. The company has said the group is just one of "hundreds of organizations" that receive funding from the Kochs and that it operates "independently" of Koch Industries. But the document suggests a close collaboration between officials of Koch Industries, AFP, and Freedom Partners, whose staff and board are stacked with numerous current and former Koch Industries employees.