Why are those entitled CPAC jerks so obsessed with their violent fantasies? 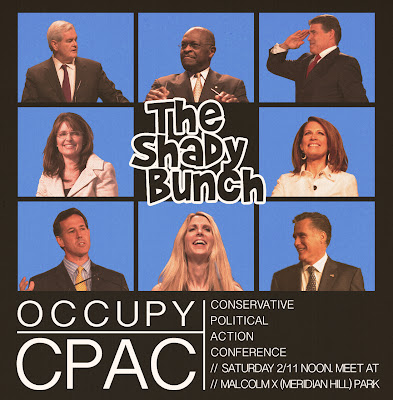 Quite a parade of horribles will speak at CPAC's annual greedfest in Washington, D.C., starting tomorrow. Premium wine enthusiast Paul Ryan will be there, no doubt explaining why Social Security is fine for him but not for anyone else. Newt Gingrich may once again call for union janitors to be fired so their kids can clean schoolrooms. Koch whore Gov. Scott Walker will deliver a speech,  69 percent of which will be lies, unless the feds wrap him up before he takes the podium.

CPAC stands for Conservative Political Action Conference, and attendees are about as intellectually honest as Josef Stalin's propagandists. You can be sure they'll be spouting their fairy-tale economics, in which the Free Enterprise Fairy gives lots and lots of presents to deserving "conservatives." In the CPAC children's book version of reality, Tax Breaks for the Rich magically "trickle down" on all of America and Big Bad Labor Unions deprive workers of their Freedom. They're even offering workshops called ‘Return of Big Labor: What Can We Learn from Wisconsin & Ohio,‘ and ’Taking back Wall Street: The Tea Party vs. Occupy Wall Street.’

To counter these misguided voices, union members and Occupy DC are planning two direct actions in front of the Marriott Wardman Park Hotel at noon on Friday and at 5 pm the same day (Woodley Park Metro stop on the Red Line). The Teamsters will be there with our inflatable fat cat. Be there!!

These will be peaceful actions, much to the chagrin of the CPACees. Judging by the Tweet-o-sphere, the narcissistic 12-year-olds who attend CPAC are obsessed with violence and grooming. They can't really argue the merits of the corporate greed, inequality or Wall Street criminality they so ardently support. So they use the time-honored tactic of being shocked that their critics plan physical assaults -- assaults that exist only in their own imaginations.

Never mind that the only people promoting mayhem are the entitled jerks attending CPAC.
Posted by Teamster Power at 3:20 PM