Sotheby's Teamsters on art and the lockout 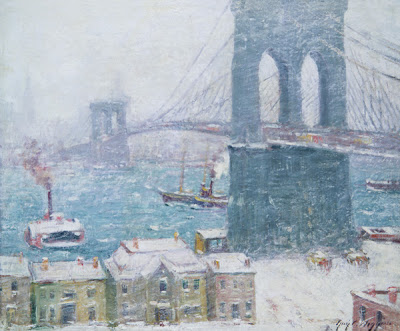 Sim Jones is a Sotheby's Teamster who's been locked out of his job since Aug. 1. This painting is by one of his favorite artists, Guy Wiggins. Jones tells MetroFocus,


The first paintings I fell in love with were Guy Wiggins’ snow scenes, but that’s just because I’m a city kid. I love what he does with his paint. He brings out the light, and you really get a feel for New York City.

Props to Sam Lewis at MetroFocus for interviewing our locked-out brothers. The story, "Love’s Labor Lost: Lockout at Sotheby’s" is a great read. We learn, for example,


There is a right way and a wrong way to pick up a $15,000 chair that was made in 18th century France. According to Sotheby’s art handler Luis Baucage, this kind of knowledge matters when you’re handling high-priced antiques. “But there’s more than a price tag underneath the cushion,” Baucage cautioned. “There’s an entire history to learn.”

Anwari Musan, the youngest art handler, says he tries to picket every day:


I just want the people to know that we’re out here everyday for a purpose, we’re not just making noise. The clients seem to be so focused on the auction and people from the community don’t always come inside the building, but they wake up to our whistles. I want them to know that they’re actually waking up to our struggle. Now that we’ve been out here for three months, people from the community have started coming by and asking us questions.