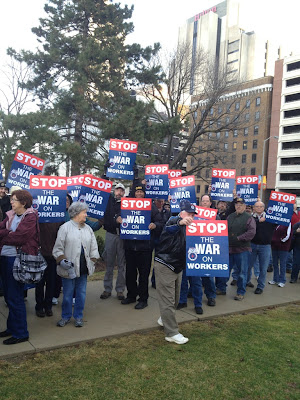 Thousands of working people crowded the Indianapolis streets today to protest the passage of right-to-work-for-less legislation. Our Teamster brothers and sisters were there in force, along with members of other unions, their families, their friends and their neighbors.
As many as 20,000 were estimated to have spoken out against the legislation that will lower wages for all Hoosier working families. 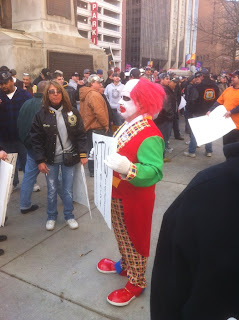 
Hoosier workers as far as I can see!

The bill passed 28-22 earlier today, despite shouts of disapproval from ever-growing crowds inside the Statehouse. Later, a rally was held outside the Statehouse lawn, followed by a march to Lucas Oil Stadium, where the Super Bowl will be held.

Here's the AFP on what happened:


While Super Bowl players prepared for Sunday's NFL title showdown, protesting workers marched on the host stadium after a vote Wednesday by Indiana lawmakers to weaken union power in the state.

With thousands of protesters in and around the Statehouse in the shadow of the NFL host hotel, the Indiana Senate voted 28-22 for a bill that forbids companies from making deals with unions that force non-members to pay dues.

"It's a union-busting tactic all the way," said protesting carpenter Mike Coomes. "You just create more poverty. They want us to go back to slavery. We've worked 150 years to get here and they wiped it out in one vote." 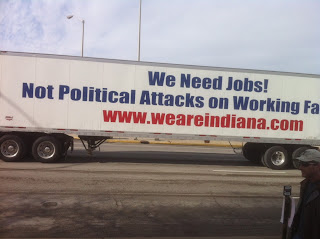 Posted by Teamster Power at 6:48 PM