How the super-rich ruin our lives 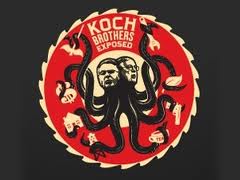 The question is how do America's 1 percent get so powerful they can steal our wages, loot our pensions, fraudulently foreclose on our homes, charge us with hidden bank fees, bust our unions and buy taxpayer assets for a song?

Super PACs are one way. The 1 percenters spend enormous amounts of money putting their quislings into elected office. Politico reports that the Super Political Action Committees raised about $100 million from fewer than 200 people since the beginning of 2010:


Super PACs raised about $181 million in the last two years — with roughly half of it coming from fewer than 200 super-rich people.

Those are the findings in a new study that confirms what public interest groups have long feared and campaigns are learning the hard way in 2012 — that the cash for big-ticket campaign spending like TV advertising is increasingly controlled by an elite class of super-rich patrons not afraid to plunk down a million bucks or more for favored candidates and causes.

Some 1 percenters don't even bother with Super PACs  -- they just buy themselves memberships in Congress or governorships. Pink Slip Rick, for example, spent $73 million of his ill-gotten wealth to become governor of Florida, something the Sunshine State regretted almost immediately.

ALEC is another tool used by the 1 percenters to siphon more money from America's middle class. It's a corporate conspiracy to take control of state governments, only they don't call it that. Here's their high-minded-sounding "mission":


… to advance the Jeffersonian principles of free markets, limited government, federalism, and individual liberty, through a nonpartisan public-private partnership of America’s state legislators, members of the private sector, the federal government, and general public.

It's actually funded by the Benedict Arnold Koch brothers, drug companies, airlines and such charming industries as banking and insurance.  Here's what we've found out in the past two days about ALEC:
That concludes today's lesson in how the super-rich ruin our lives.
Posted by Teamster Power at 3:17 PM