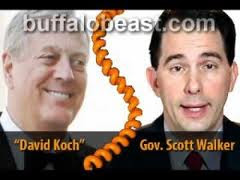 What will those wild and crazy Badgers think of next? Today is the one-year anniversary of the infamous prank call in which Buffalo Beast blogger Ian Murphy called Koch whore Wisconsin Gov. Scott Walker and talked for 10 minutes pretending to be David Koch.

(Come to think of it, it's the one-year anniversary of calling Scott Walker a "Koch whore.")

Most amazing about the call was the way Murphy got through to the governor. According to Murphy,


I called at noon and was quickly transferred to ... Walker’s Chief of Staff Keith Gilkes. He was “expecting my call.

“David!” he said with an audible smile.

I politely said hello, not knowing how friendly Gilkes and Koch may be. He was eager to help.

“I was really hoping to talk directly to Scott,” I said. He said that could be arranged and that I should just leave my number. I explained to Gilkes, “My goddamn maid, Maria, put my phone in the washer. I’d have her deported, but she works for next to nothing.” Gilkes found this amusing. “I’m calling from the VOID—with the VOID, or whatever it’s called. You know, the Snype!”


...on the anniversary of that call, be a cruel, heartless, rich bastard and talk like David Koch all day long! "Crush those Bastards" "Fly you out to Cali" "Beautiful" "Goddamn right!" "Bring a baseball bat "

The latter is a reference to the following exchange between "Koch" and Walker at a time when the Statehouse was surrounded by peaceful protesters:


Koch: Bring a baseball bat. That’s what I’d do.

Walker: I have one in my office; you’d be happy with that. I have a slugger with my name on it.


Koch: We’ll back you any way we can. What we were thinking about the crowd was, uh, was planting some troublemakers.

Walker: You know, well, the only problem with that —because we thought about that. The problem—the, my only gut reaction to that is right now the lawmakers I’ve talked to have just completely had it with them, the public is not really fond of this…

Since then, Koch and his brother Charles have been exposed for their attacks on democracy and Walker faces a recall election, tentatively on June 5.

What's disheartening is to think that someone as dumb as Scott Walker can become governor and harm thousands of working families just by sucking up to a cruel, heartless, rich bastard.

The mind boggles.
Posted by Teamster Power at 11:36 AM