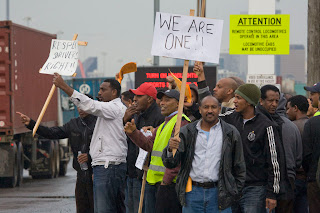 We're cross-posting this from Seattle Solidarity at Highboldtage. It's about the rally to support the Seattle port truckers on Monday, Feb. 13:

Over the last two weeks non-unionized short-haul truckers at the port have refused to work until they receive better treatment. For months they’ve been trying to build an association to fight back. These mostly immigrant workers face horrendous conditions on the ports – e…xtremely low pay, harassment from law enforcement and trucking companies, exorbitant fees charged by the companies that more than once have resulted in “negative” paychecks for the drivers.

Because of this they’ve stopped work, first at just one company, but it has since spread to many companies, slowing all traffic at the port. They’ve asked us to support them at a strike rally they’ll hold on Monday. We’ll be there with banners and flyers. Their situation is desperate, and it’s extremely important we show solidarity, we’re there to say “We support the Seattle truck drivers and their association.”

Depending on how their actions go there may be future ways we can help out. People from Occupy have also organized a food drive for the truckers – who aren’t making any money while they’re out. Please feel free to bring some donations of non-perishable food, diapers, baby wipes and etc – for the striking truckers and their families

Check out the Facebook page here.
Posted by Teamster Power at 2:33 PM