A labor-backed tour to "Reclaim Wisconsin" and a gigundo rally in Madison on March 10 will mark the one year anniversary of the Wisconsin uprising against Koch whore Gov. Scott Walker's attacks on working families.

Let's hope it marks the beginning of the end for Scotty boy. Wisconsin can't take much more of his "leadership" as the state is hemorrhaging jobs faster than any other state in the country. He is certain to face a recall election and he is certain to fund his campaign with tens of millions of dollars from out-of-state 1 percenters.

Our brothers Pat Walker and Rob Moss from Local 695 will be at the March 10 rally, along with many more of our Teamster brothers and sisters. For more information, click here.


The LaCrosse Tribune reported on the beginning of the "Reclaim Wisconsin" tour on Feb. 15:

The Wisconsin AFL-CIO tells us more about the Tour:


The “Reclaim Wisconsin” Tour will culminate with statewide candlelight vigils on March 9 and a “Reclaim Wisconsin March” in Madison on Saturday, March 10. These events will mark the one year anniversary of when Gov. Walker and Senate Republicans rammed through the collective bargaining bill illegally in the dead of night.

Under Walker's "reforms," the state has lost jobs. Lots of them. Those red bars below, showing job loss, appear when Walker's budget took effect. 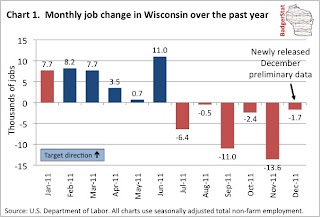 (Thanks to Publius No. 9 for that.) That's why Walker may soon be an ex-Koch whore governor. Here's how the Associated Press sees the recall:

Nowhere are the parties’ contrasting visions on more vivid display than in Wisconsin, where Democrats submitted more than a million petitions in January to recall Walker, whose efforts to slash state worker benefits and end their collective bargaining rights drew fierce protests from union members and other activists.

The special election is expected to take place in June, with a likely primary in May to select a Democrat to challenge Walker. Former Dane County Executive Kathleen Falk, a favorite of labor leaders, is expected to run, and Milwaukee Mayor Tom Barrett is also exploring a race.

Both parties agree that the Wisconsin recall is likely to be the closest governor’s race of the year, and possibly the most expensive.

Posted by Teamster Power at 5:36 PM